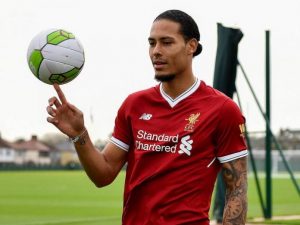 Virgil van Dijk has described Liverpool as the perfect match for him after his world-record move from Southampton was finalised.

The Netherlands centre-back is now the most expensive defender in football history thanks to a £75 million switch from St Mary’s to Anfield.

And he is hopeful that he will be able to properly showcase his talents under Jurgen Klopp on Merseyside.

“I am happy to be here and I can’t wait to get started,” Van Dijk told Liverpool’s official website.

The 26-year-old looked on from the stands as a Mohamed Salah brace sealed a 2-1 win for Liverpool over Leicester City on Saturday and he is looking forward to sampling the Anfield atmosphere from the pitch.

“I think it’ll be something special,” he said. “I think Anfield is a very special stadium and it is my home right now as well.

“I am just looking forward to being on the pitch, especially as a [home] player at the stadium. It’s going to be nice, especially the evening games and the European nights.”

Van Dijk added: “I hope to win trophies. Every player wants to win trophies and with this squad we have and the progress the club is making, I think we are very close to it.”

Virgil van Dijk believes Liverpool are the “perfect match” for him after his world-record move from Southampton was officially completed on Monday.

The 26-year-old’s switch from St Mary’s to Anfield was agreed last week but with the January transfer window now open his deal, understood to be worth £75m – the highest fee ever paid for a defender – is now sealed.

“I think the most important thing is the size of the club, the culture of the club, the players, the manager and obviously the fans, who make the club this special,” the Dutchman said. “With the history at the club and everything around it – even the training ground and stuff – it is just a perfect, perfect match for me, and for my family as well. I think this is the right time for me to be here and to develop all sorts of aspects of my game. I am looking forward to doing that, that’s the main thing.”

Van Dijk, who has signed what Liverpool have said is a “long-term contract” at Anfield, is not concerned about his price tag weighing heavy. The transfer fee eclipses the £53m spent by Manchester City to sign the England full-back Kyle Walker from Tottenham Hotspur last summer.

Van Dijk is unavailable for Liverpool’s New Year’s Day game at Burnley because his registration will not be concluded in time but he could make his debut in Friday’s FA Cup third-round tie against Everton at Anfield.