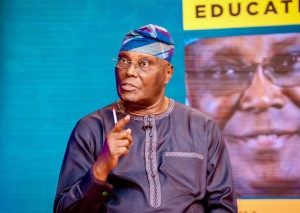 Atiku Abubakar, Nigeria’s former vice-president, has claimed that he led the economic management team during the tenure of former President Olusegun Obasanjo.

The presidential candidate of the Peoples Democratic Party (PDP) made the claim on Monday, at the presidential dialogue on the economy, organised by the National Economic Summit Group (NESG) in Lagos.

“As head of the economic management team, while I was Vice President, I was instrumental in designing a private sector revival strategy and advocated for the opening of the economy for private sector investments in several sectors. And we made tremendous progress,” Atiku said.

“We paid off nearly all of our foreign debt which was crippling the country.”

But how true is the claim that Atiku led the economic management team?

The economic management team was established by Obasanjo in 2003 at the beginning of his second term as president.

A publication on Nigeria’s debt reform, published by the Centre for Africa-Europe relations said: “When President Obasanjo was re-elected in 2003, he appointed a new economic management team headed by former World Bank director Ngozi Okonjo-Iweala. This team implemented many policy reforms.”

In a report where Okonjo-Iweala recounted her journey through economic reforms, she admitted that in 2003, after she got permission of Obasanjo to set up a presidential economic team, the former president decided to preside over the team as the chair, while she takes the lead.

The team, which consisted of 12 members with expertise in macroeconomics, microeconomics, debt management, privatisation, private-sector development, governance, anti-corruption measures, civil-service reform, and budget management, were responsible for designing and implementing economic reforms under the Obasanjo administration.

As head of the economic management team and finance minister, Okonjo-Iweala led the negotiations for Nigeria’s debt relief.

After the negotiations, Nigeria and the Paris Club announced a final agreement for debt relief worth $18 billion, after Nigeria paid $12 billion.

No. The two entities are not the same and do not perform the same functions.

During his stint as VP, Atiku headed the National Economic Council (NEC).

His biography on the Yar’adua Foundation’s website reads: “As Vice President, he (Atiku) chaired the National Economic Council which was responsible for assembling the outstanding talent that transformed the Nigerian economy, more than quadrupling GDP between 2000 – 2007.”

NEC was established by the provisions of the 1999 constitution of the federal republic of Nigeria, as amended, specifically section 153(1) and paragraphs 18 & 19 of part I of the third schedule.

Membership of the NEC comprises the VP as chairperson, 36 state governors, the governor of the Central Bank of Nigeria (CBN) and other co-opted government officials.

The council holds meetings once every month.

Atiku’s claim that he was the head of the economic management team is false. The team was set up in 2003 during Obasanjo’s administration, the former president was the chair while Okonjo-Iweala led the team.

The PDP presidential candidate must have confused NEC with the economic management team.