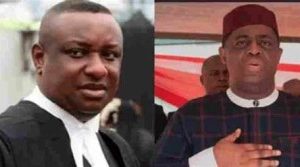 There is always something exciting going on, so there is never a dull moment in the countdown to the presidential elections in 2023.

As I keep saying, different people are involved in this electoral process, depending on their interests. There are observers, candidates, electorates, analysts, and, of course, entertainers.

These entertainers can now be found in all of the above-mentioned categories, including aspirants, electorates, observers, and even the entertainers themselves.

As we speak, all political parties are making last-minute preparations for the start of electoral campaigns and based on the composition so far, Jokers may be added to the list of categories previously mentioned.

The presidential race would be dominated by the ruling APC, the main opposition party, the PDP, and the fast-rising LP. So what these parties say and do will make major headlines and be scrutinized by the electorates, who are ultimately the target audience.

The news that Chief Fani Kayode has recently joined Festus Keyamo as the spokesman of the APC presidential campaign council has reached our news desk at Bush Radio headquarters. This could spell trouble for the PDP and LP.

With the joining of FFK and Keyamo, it can only mean one thing: “Wotowoto Everywhere.” These two men have proven to be dedicated to whatever they set out to do, and to both politicians’ credit, they play their game with FINESSE, which makes them unique in their own way.

Contrarily, the PDP has Dino Melaye and Daniel Bwala serving as their presidential spokesmen, which adds intrigue and makes the contest interesting and worth watching.

A former senator who now creates social media skits, many people view Dino Melaye as a social media prankster who posts numerous back-to-back skits in which he presents himself as a comedian, dancer, and dramatic singer.

He has portrayed every character in a typical Nollywood film, from a groundnut vendor to an action movie hero who outwits hired killers and the appropriate security forces to a character who is disabled or ill. Of course, he also sings a lot in many of his roles.

You can take it or leave it. Dino Melaye, despite the fact that the majority of Nigerians regard him as a jester who makes fun of himself on the internet, would be dishing out a plethora of content that would be very entertaining for the viewers at home.

On the other hand, Daniel Bwala recently switched from the APC to the PDP and still appears unsure of which party he still belongs to because he has displayed a lack of confidence in his new position as the PDP’s presidential spokesman.

He recently showed this lack of confidence on national television when he stated that the PDP is aware that it will not win the presidential election in 2023. He later tried to correct himself, but many people saw the statement as a blunder in prediction.

Festus Keyamo, the cerebral SAN, is regarded as a smooth talker who is willing to back up his claims with facts. He can be described as a tough, die-hard APC supporter. He would undoubtedly add charisma and class to the campaign.

Femi Fani Kayode is not new to such assignments; his only flaw is his passion for sticking to whatever course he believes in without apologizing to anyone; he is willing to accept the consequences of his actions. Fearless and regarded as a person who tells it like it is.

Fani Kayode would be an excellent MARKSMAN for the dynamic duo of Dino Melaye and Daniel Bwala; indeed, it is Wotowoto Everywhere from both camps.

Leave your thoughts in the comments section.