The ‘Wedding Party’ actress also recalled some of her childhood memories during the interview. 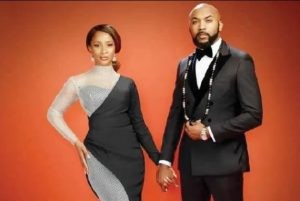 “Adesua Etomi-Wellington, the popular Nigerian actress, has said she sometimes has cause to reject some of her husband, Banky W’s gifts.

In a joint interview with her husband on the BlackBox show hosted by media personality, Ebuka Obi-Uchendu, the actress said, “I don’t think I am the typical last born. I do think I did not have it as hard as my siblings did. Things were a bit stable when my parents had me but I went through my fair share of struggles. I am more independent than what most people think of last-born children.

“When I and Banky W started knowing each other, I guess that was why he did not understand why I didn’t allow him do some things for me. That is because I could do them myself. I was not trying to be strong-headed. Banky’s love language is acts of service while mine is quality time. So, at times when he wants to buy me something, I simply tell him that I don’t need it.”

Recalling some of her childhood memories, the ‘Wedding Party’ actress said, “I was born in Owerri, Imo State, and I was there till I was three years old. My dad was a soldier. We later moved to Lagos. There was a bit of family drama. My parents split up, and my mum moved to the United Kingdom. Three years later, when I was in my early teen, I joined her.

“My mum moved because she needed a change. She had been through a lot. Thinking about it now, I feel God had a hand in her moving because that was when her life really started. She is a brilliant civil engineer with her own construction company then in Lagos. She was very intentional about life. Three years after getting to the UK, she had several jobs and sent money to me and my siblings in Nigeria.