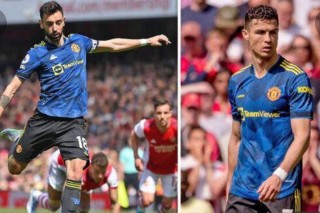 United were 2-1 down when referee Craig Pawson pointed to the spot after a Nuno Tavares handball.

Fernandes stepped up and sent goalkeeper Aaron Ramsdale the wrong way, but saw his effort hit the post and go wide.

It’s the second penalty he’s missed this campaign and many wondered why Ronaldo, who had scored made it 2-1 did not step up to take it.

He told talkSPORT: “The two of them talk about it and Cristiano told me he didn’t feel well enough, or didn’t feel as though he should take the penalty – and that’s why Bruno took it.”

Ronaldo missed Tuesday’s defeat to Liverpool after the tragic death of his newborn son.

The 37-year-old and partner Georgina Rodriguez confirmed the news on Monday while also confirming the birth of their daughter.

When asked if Ronaldo’s decision was impacted by that, Rangnick replied: “I don’t know. You’ll have to ask him. They’ve both taken penalties and converted penalties, so it’s up to the two of them to decide.”