The Rivers State chapter of the All Progressives Congress (APC) has accused Governor Nyesom Wike of merely playing politics with his Wednesday’s N200 million donation to the Internally Displaced Persons (IDPs) in Benue State, while Rivers people are wallowing in abject suffering. 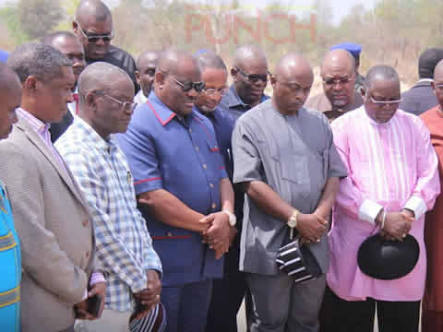 It expressed shock that whereas victims of killings and criminalities in various parts of Rivers state were licking their wounds and wondering where help would come from, but their governor was busy donating money in another state, creating the impression that all was well in Rivers state.

Rivers APC, through its Publicity Secretary, Chris Finebone, yesterday in Port Harcourt, stated that lofty as Wike’s gesture seemed, what he only succeeded in doing was classical and wanton display of primitive hypocrisy of the worst type.

The main opposition APC in Rivers said: “Beyond the highly politicised, self-serving and half-hearted visits to Omoku (in Rivers State, where 23 innocent worshippers were massacred on New Year’s Day), Wike has completely ignored the killings in various parts of Rivers State, especially in the local government area of his Peoples Democratic Party (PDP) National Chairman – Andoni (Prince Uche Secondus).

“The Rivers governor has neither mentioned nor visited Ajakajak and other Andoni villages, where many persons have been gruesomely killed. Why has Wike not gone to visit victims of killings in Rivers State and donate to their welfare, but chose to travel to distant Benue State to display crass duplicity? APC demands an answer from the Rivers governor.

“We believe that the only purpose for the Rivers governor’s ego trip to Benue State is mainly to score cheap and pedestrian political points that have no value whatsoever to Rivers people. He (Wike) is only working in line with his belief that he is the de facto leader of PDP. Our people consider the current doling out of N200 millions of Rivers money as part of the billions of naira Wike is spending to sustain and exercise control over his political party – the PDP.”

Rivers APC also called on well-meaning elders and opinion leaders of the state to prevail on Wike to refrain from playing Robinhood with Rivers money, but to use the commonwealth of Rivers people to give the citizens meaningful development and not the superficial projects he had been deceiving the people with.

Having openly donated money, the main opposition APC equally called on the Federal Government and its security agencies to keep an eye on Rivers governor, in order not to donate “other things” secretly, given that reprisals were already happening in Benue state.