Wike’s Group Meet In Abuja To Plot Next Move 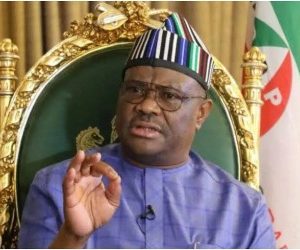 Apparently still angered by the lack of meaningful initiative at reconciliation from the presidential candidate of the Peoples Democratic Party (PDP), Atiku Abubakar, the governor of Rivers State on Sunday, met with governors backing him to consider the way forward as the 2023 presidential elections inch closer.

Others include former PDP Deputy National Vice Chairman North, Senator Suleiman Nazif; former Attorney General and Minister for Justice, Adoke; member of the House of Representatives from Kogi State, Tijjani Yusuf, among others.

There were also various coordinators of his presidential campaign led by former Information minister Jerry Gana.

Even though the agenda of the meeting was not publicly revealed, the Nigerian Tribune gathered that it was a fallout of the vice-presidential selection process in which Atiku snubbed Wike despite being recommended by the committee set up for the purpose.

The group is miffed that despite humiliating the Rivers governor, the PDP presidential candidate had yet to reach out to him to placate him as being pushed by Governor Ortom.

Gana, a member of the PDP Board of Trustees and North Central Coordinator of the Wike Presidential campaign, spoke briefly to reporters after the meeting saying: “This is the first meeting we are holding with all our candidates in the states after the primaries. We are united and are one.

“We know that developments will unfold and when they do, we shall brief Nigerians.”