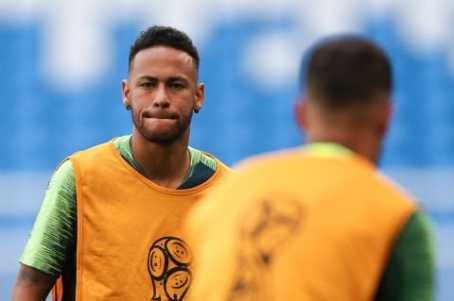 Brazil Coach Tite has stated that Neymar is not playing to his full best at this year’s World Cup in Russia.

The PSG Star played all three group stage matches and scored only once but helped Brazil secure top spot in Group E.

Despite a successful group campaign, fans were not too impressed by the five time World Cup winners.

Now, Tite has insisted Neymar’s Performances are ‘not high enough’.

‘He helped the wingers, helped to switch and to finish attacks.

‘I don’t know how he will play in the match against Mexico, but we track all the data. His average performance [after the three matches] exceeds his teammates performances, but the figure is not high enough for Neymar.

Tite then added that Neymar could need five or six matches to return to his best form.

‘I hope he’ll play all these matches and reach his goal,’ he added.

Brazil’s next match is Today at the Samara Arena against Group F runners-up Mexico.

The winner of the match will go on to face either Belgium or Japan in the quarter-finals which is scheduled for July 6th.