Cristiano Ronaldo continued his sensational start to the World Cup with the winner as Portugal knocked Morocco out of the tournament.

All eyes at the Luzhniki Stadium were on the Real Madrid star after his hat-trick in Portugal’s opening game with Spain and, typically, he did not disappoint.

It took the captain only four minutes to make his mark in the way Morocco had feared, diving to get on the end of a Joao Moutinho cross and planting an unstoppable header into the net.

Ronaldo’s goal put the European champions briefly top of Group B and extended his lead as the top scorer in Russia in the race for the Golden Boot.

Spain’s 1-0 win over Iran, means they top the group courtesy of having collected fewer disciplinary points than Portugal.

Morocco, who last week failed in their bid to host the 2026 World Cup, became the first team to be eliminated from this one with one Group B game to go – but they did not go down without a fight.

Backed by thousands of noisy fans, who packed one end of the ground, they created enough chances to earn at least a draw – and would have got something out of the game with better finishing.

Too many of their shots flew wide, however, and the one time the North Africans did find the target with an effort of note, new Wolves keeper Rui Patricio produced a brilliant one-handed diving save to keep out Younes Belhanda’s header.

The North African nation, beaten 1-0 by Iran in their opening game, are playing at the World Cup for the first time in 20 years.

Ronaldo again shows why Portugal rely on him

Ronaldo has been the undoubted star of the first week of this tournament and he ensured he will stay in the headlines with another decisive contribution.

He was the centre of attention from the moment his image flashed up on the huge screens, cheered by the Portugal fans and others who had travelled to Moscow solely to watch him – and jeered by the Morocco fans.

The 33-year-old’s performance was not as spectacular as the one he produced about Spain, but he again showed why his team rely upon him so heavily.

Of Portugal’s eight shots, he had six of them – including the one that mattered the most. 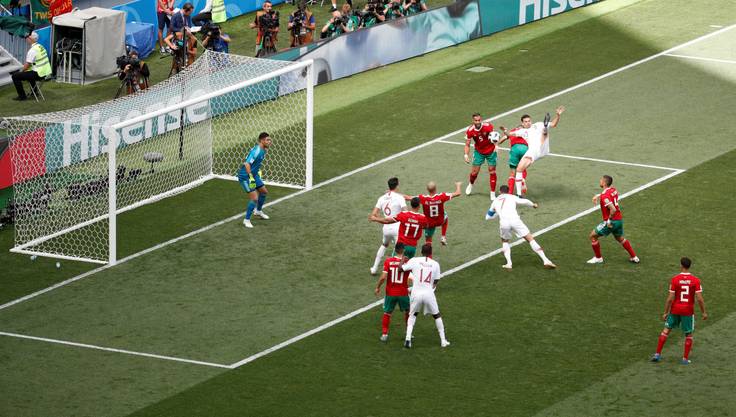 Ronaldo’s other contributions, other than the flicked pass that released Goncalo Guedes to force a fine stop from Munir Mohamedi, were more fitful, but the intelligence of his movement and sheer presence up front meant he remained a threat.

There were no more magic moments, however, to the disappointment of the thousands in the crowd who recorded his two free-kicks from the edge of the area with their smartphones, only to see him smash them into Morocco’s defensive wall.

Portugal offered little else in the way of a threat, and defensively the number of problems Morocco caused them must be a concern for their coach Fernando Santos, with bigger tests likely ahead.

But Ronaldo’s Russian roadshow rolls into Saransk on Monday, and shows no sign of stopping.

Morocco out but not disgraced

Morocco now know they will be heading home after the group stage, but they will not depart in disgrace.

They gave their fervent support plenty to cheer in the Moscow sunshine and, just as in their opening defeat by Iran, can count themselves unlucky to leave left empty-handed.

The talk before the game was whether Herve Renard’s side had a plan to stop Ronaldo and, while the former Cambridge United manager did not manage that, he did find a way to open up the Portugal defence. 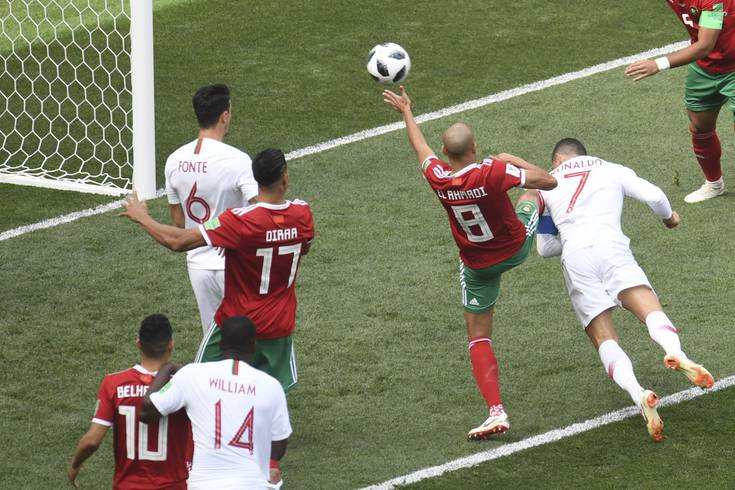