Sweden marked their first appearance in the World Cup for 12 years by beating South Korea thanks to a penalty from captain Andreas Granqvist that was awarded after a video assistant referee (VAR) review.

There was a short delay for Kim Min-woo’s foul on Viktor Claesson to be analysed on video and for the referee to point to the spot but it did not affect Granqvist, who sent goalkeeper Cho Hyun-woo the wrong way.

Sweden, who join Mexico at the top of Group F on three points, created the better chances in Nizhny Novgorod.

Marcus Berg should have scored midway through the first half but his close range shot was beaten away by Cho, while South Korea did not manage a single shot on target.

South Korea, competing in their ninth successive World Cup, were disappointing and the closest they came to scoring was when Hwang Hee-chan headed wastefully wide in the closing moments.

The result means Mexico, 1-0 winners over world champions Germany on Sunday, and Sweden have a three-point lead at the top of Group F after the first round of matches.

Sweden reached Russia by beating France in a group game on the way to finishing above the Netherlands in the table and reach the play-offs, when they overcame Italy.

However, they arrived in Russia without a goal in their previous three matches and without Zlatan Ibrahimovic after his retirement from international football.

Indeed, Janne Andersson’s team looked to be heading for a goalless draw until the second-half penalty – the seventh spot kick to be awarded at the tournament.

There was little doubt about the validity of the penalty as replays showed Claesson, who plays his club football in Russia, was clearly caught.

Granqvist, 33, kept his nerve to become the oldest player to score on his World Cup debut since Martin Palermo, who was 36 when he netted for Argentina in 2010.

In doing so it meant the proportion of the 26 goals scored so far at this World Cup from the penalty spot rose to 19%. 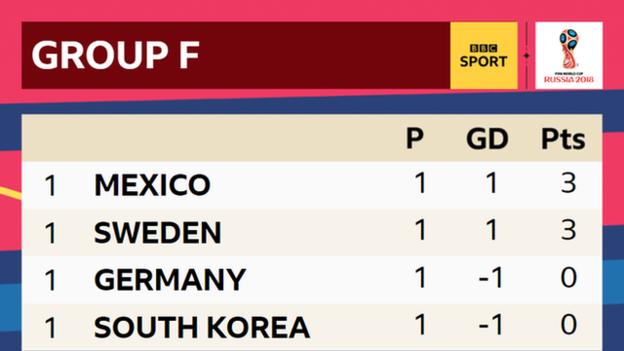