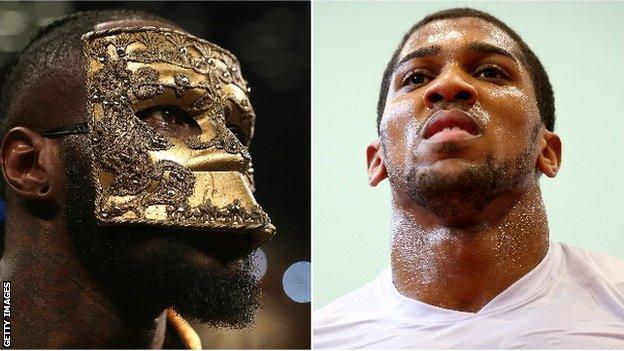 On Tuesday, it emerged Joshua had been ordered by the WBA to agree a deal to face Russia’s Alexander Povetkin.

The move means any bout between Joshua – who also holds the IBF and WBO belts – and Wilder, looks set to be delayed.

He continued: “All they had to do is say they were scared to fight. Period. But instead they made themselves look like what they are, not stand up guys.

“I’m so happy it’s over now I’ve done my part the world seen that so stay in England.”

Any bout between Joshua, 28, and Wilder, 32, would see the winner become the first man in history to hold all four heavyweight world titles.

It would also prove to be one of the most lucrative in the sport’s history and Wilder’s series of tweets contained insults about both Joshua and promoter Hearn.

He said Joshua and Hearn had “led boxing fans on for three months”, adding they “never wanted this fight”.

Hearn has previously said there was always the risk of either the WBA, IBF or WBO forcing Joshua to face one of their mandatory challengers.

He also claims to have sent a contract to Wilder’s team last week and on Tuesday said his fighter was “frustrated” over delays in agreeing a deal with Wilder.

In responding to a Wilder tweet in which the American said his team “did it all” to make the fight happen, Hearn said: “You did it all..apart from none of the above or sign the contract or even respond to the contract.”

WBA president Gilberto Mendoza said his organisation had already granted Joshua and Wilder’s teams an extension to agree a bout but said they now wanted a date for Joshua-Povetkin with “immediate effect”.

Povetkin knocked out David Price in March to become mandatory challenger. He has 34 wins from 35 bouts with his one defeat coming against Wladimir Klitschko in 2005.