Yul Edochie’s Second Wife Reveals Why Her Critics Should Love Her, Nigerians React 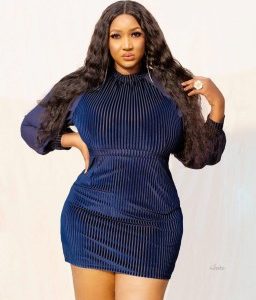 Nollywood actress Judy Austin has sent a message to trolls.

Judy who is Yul Edochie’s second wife mentioned the reasons her critics should love her.

Recall that she has been mocked, trolled and lambasted since Yul unveiled her as his second wife.

Many accused her of snatching the actor from his first wife May Edochie.

Taking to her Instagram page, Judy questioned why critics cannot love her back.

She showered praises on herself, stating she’s beautiful, intelligent, hilarious and a phenomenal woman.

march2283 wrote: “with all these qualities u became a second wife n not the president wife. A wife they cannot freely post on their handle like the first wife.”

okitetochi wrote: “With all these, you still became a second option. Too bad sha”

bimbylads wrote: “All this attributes for yourself is enough for you to get yourself a man not another woman’s husband”

mzzzpwetty wrote: “Being a second wife is not bad…some of us insulting her are even products of second wives…Biko let d woman breath. May God bless ur home…”

risky_thunder wrote: “Is better to be a second wife than to a carpet so every man will be stepping on.”

ca_milla8335 wrote: “Unfortunately you have to become second wife and you are here telling us how beautiful you are and you could get a husband of you own. Beautiful my foot.”