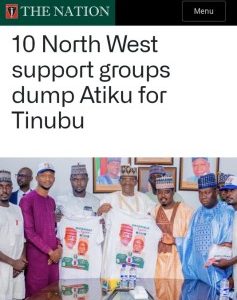 The electoral fortune of the presidential candidate of the opposition Peoples Democratic Party (PDP) Atiku Abubakar suffered at the weekend when 10 support groups defected to the ruling All Progressives Congress (APC).

The statement said Zamfara Governor, Bello Matawalle and the APC National Vice Chairman (North West), Salihu Moh Lukman, received the members of the support groups of PDP into the ruling party in the North-west zone in Gusau, Zamafara State Capital.

The statement reads: “Governor Bello Matawalle of Zamfara state in his capacity as the Zonal Coordinator North-West of the Presidential Campaign Council together with APC National Vice Chairman North-west Vice of the All Progressives Congress (APC) Salihu Moh. Lukman spent hours receiving the PDP and Atiku support groups on Friday, November 25, 2022.

The statement further said Matawalle told the decampees that “APC is the only party that uphold to the principles of power rotation, saying the highest justice to be done to the people of the South is to be able to shift power to their region so that justice and equality can be ensured.

“He urged them to uphold the commitment they have exhibited over the years for the victory of the APC and all its candidates at all levels.

He told the defectors Tinubu, APC has mapped out strategic development plans that would help consolidate the existing reforms under President Muhammad Buhari.”