Fintiri Escapes Unhurt As Truck Crushes Vehicles In His Convoy 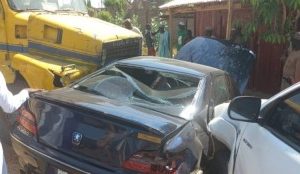 Governor Ahmadu Fintiri of Adamawa State escaped unhurt after a truck crushed two vehicles in his convoy on Saturday.

According to a witness, the incident happened shortly after the governor and some of his commissioners entered a black Mercedes bus at the end of a wedding at Agga Mosque in Dougirei highbrow area of Yola, the state capital.

A resident, Muhammad Dougirei, said the tipper suddenly ran toward the governor’s convoy at a speed so high, suggesting that the driver had lost control.

Dougirei told our reporter who visited the scene that the truck driver managed to steer the truck away from the direction of the bus conveying the governor to hit the official vehicle of the permanent secretary, Political and Security Affairs at the government house, and a Peugeot 406 conveying a video journalist and the two injured policemen.

According him, the police escort consequently manhandled the elderly driver as well as a young man who pleaded with them to take it easy with him before the driver was thrown in to a police pick up van and whisked away to Jimeta Police Division in the metropolis.

However, the governor who came out unhurt, personally rebuked the driver after which he was hurriedly transferred to a Toyota jeep.

A security source revealed that the injured Inspector was still lying unconscious at the Intensive care unit of the Specialists Hospital while the Sergeant had regained consciousness.

“The incident took place within the twinkle of an eye; only a sheer of luck saved the governor and other passengers sitting with him in the bus. See how armed security men ran for their lives before the truck halted after hitting the two vehicles.

The governor had on Friday had a case against his victory in the primary election quashed by the Supreme Court, a development that confirmed him as his party’s governorship candidate for the 2023 election.

When contacted, spokesman for the Adamawa Police Command, DSP Sulaiman Nguroje, promised to get details of the incident and get back to our reporter. 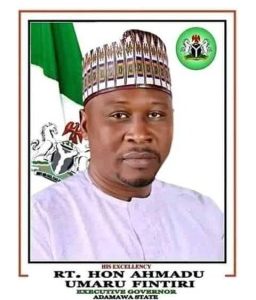