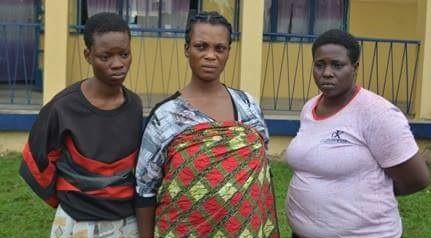 The Imo State Police Command have arrested more members of a child trafficking syndicate in connection with the sale of a newborn baby boy for N550,000.

Parading the suspect and others at the command’s headquarters in Owerri on Wednesday, the state Commissioner of Police, Dasuki Galadanchi, said an 18-year-old mother,  Nwaokwe Chijioke, of Ogada Atta in Ikeduru L.G.A, conspired with Onyinyechi Chibueze, 29, of Amaruru Iho – Dimeze in Ikeduru L.G.A and a trainee nurse, Nwokeogu Lilian Chinwe, 35, of Dikenafai in Ideato South L.G.A, to sell her baby.

“The suspects conspired and sold a four months old baby boy delivered by Nwaokwe Chijioke to the proprietor of Unity Hospital Anara in Isiala Mbano L.G.A where Nwokeogu Lilian Chinwe is a trainee nurse. Suspects have made useful statements to the police confessing to have received the cash sum of five hundred and fifty thousand naira (N550, 000.00) as proceeds from the sale from the proprietor of the hospital who is still at large. Investigation is in progress as efforts are been beefed up to apprehend the proprietor of the hospital and recovery of the baby boy.” the CP said.