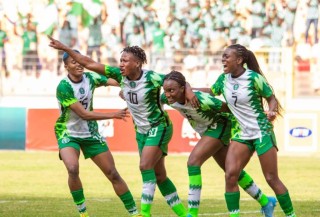 A brace from American-born striker Ifeoma Onumonu earned the Super Falcons of Nigeria a 2-0 win against Côte d’Ivoire, in the first leg final round qualifiers for the 2022 Women’s Cup of Nations, at the Moshood Abiola Stadium, Abuja on Friday,Completesports reports.

Leicester City defender Ashleigh Plumptre made her competitive debut for the Falcons and gave a five-star performance.

The Falcons were without regulars like Asisat Oshoala, Francesca Ordega and Desire Oparanozie.

Onumonu broke the deadlock in the 21st minute after finishing off from close range off a pass from Esther Okoronkwo inside the box.

In the 51st minute Côte d’Ivoire went close to equalizing but brilliant defending by Michelle Alozie which was followed by a fine save from Chiamaka Nnadozie denied the visitors.

Onumonu got her second goal to put the Falcons 2-0 ahead on 56 minutes as she lobbed the ball over the Ivorian goalkeeper.

The Ivorians bossed the closing stages of the game but the Falcons defense held firm to see out the encounter.

Both teams will meet again on Tuesday, February 22 for the return leg in Abidjan.

The winner between the Falcons and Côte d’Ivoire will qualify for this year’s Africa Women’s Cup of Nations (WAFCON) in Morocco.

The 2022 WAFCON, which will hold from 2nd to 23rd in July, will also serve as qualifiers for the 2023 FIFA Women’s World Cup in Australia and New Zealand.

Semi-finalists at the WAFCON will qualify for the World Cup while two more teams will advance to the Inter-confederation play-offs.