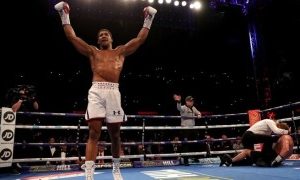 British-Nigerian boxer, Anthony Joshua has entered the WBC heavyweight rankings ahead of his potential all-British showdown with Tyson Fury.

The British-Nigerian was inserted at No.6 in WBC heavyweight top 15 rankings following successive defeats to Oleksandr Usyk, who retained the WBA, IBF, and WBO belts by split decision in last month’s rematch in Saudi Arabia.

This comes after Joshua’s team confirmed they had accepted the terms laid out by Fury’s team ahead of a potential all-British super-fight on December 3.

A statement from Joshua’s management company 258 MGT on Monday read: “258 and Matchroom Boxing can confirm, on behalf of Anthony Joshua, that we accepted all terms presented to us by Tyson Fury’s team for a fight Dec 3 last Friday.

“Due to the Queen’s passing, it was agreed to halt all communication. We are awaiting a response.”

Fury’s promoter Frank Warren issued a quick reply. He tweeted in response: “Contract will be with you very soon.”

See the WBC Heavyweight Rankings below.