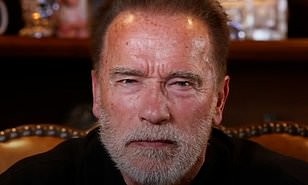 Arnold Schwarzenegger has made a direct appeal to the Russian President and the people of Russia to shed light on the ‘the truth’ about the invasion on Ukraine, describing it as a ‘humanitarian catastrophe’.

In a video shared on his 22.2million Instagram followers and media company ATTN’s Facebook page, the 74-year-old Austrian-American actor shared his love for Russia and the Russian people before making scathing remarks to Putin and the Kremlin.

Describing himself as a ‘long-time friend’ of the Russian people, he gives a direct message to Putin: ‘To President Putin, I say, you started this war. You are leading this war. You can stop this war.’
He also asks Putin and his Kremlin counterparts: ‘Let me just ask you, why would you sacrifice those young men for your own ambitions?’

The nine-minute clip garnered over 250,000 Instagram views, and 120,000 on Facebook, in an hour, with thousands commenting support and praise to the film star for his efforts to help stop the ongoing Russian invasion of Ukraine.

Schwarzenegger’s video comes as the Pentagon estimates at least 7,000 Russian troops have now died in the fighting, with another 14,000 to 21,000 having been wounded, accounting for nearly a fifth of the estimated 150,000 men that Putin amassed on the border before before giving the order to attack 21 days ago.
To the people of Russia, Schwarznegger said: ‘No one likes to hear something critical of their government, I understand that, but as a long-time friend of the Russian people, I hope that you will hear what I have to say.

‘I speak with the same heartfelt concern as I did with the American people when there was an attempted insurrection on January 6 last year, when a wild crowd was sroming the US capiotpl trying to overthrow our government.

‘You see, Ukraine did not start this war. Neither did nationalists or Nazis. Those in power in the Kremlin started this war. This is not the Russian people’s war. No.

‘As a matter of fact let me tell you, what you should know is that 141 nations at the UN voted that Russia was the aggressor.
‘They called for it to remove its troops immediately. Only four countries in the entire world voted with Russia. That is a fact.

‘See the world has turned against Russia because of its actions in Ukraine. Whole city blocks have been flattened by Russian artillery and bombs, including a children’s hospital and a maternity hospital.

‘Three million Ukrainian refugees, mainly women, children and elderly, fled their country. And many more are trying to seek to get out. It is a humanitarian crisis.

‘Because of its brutality, Russia is now isolated from the society of nations. You’re also not being told the truth about the consequences of this war on Russia itself.

‘I regret to tell you that thousands of Russian soldiers have been killed.

‘They have been caught between Ukrainians fighting for their homeland and the Russian leadership fighting for conquest.

‘Massive amounts of Russian equipment have been destroyed or abandoned. The destruction that Russian bombs are raining down upon innocent civilians has so outraged the world that the strongest global economic sanctions ever taken have been imposed on your country.

‘Those who don’t deserve it, on both sides of the war, will suffer.

‘The Russian government has not only lied to its citizens but to its soldiers.

‘Some of the soldiers were told they were going to fight Nazis. Some were told that the Ukrainian people would greet them like heroes.

‘And some were told that they were simply going on exercises.

‘They didn’t even know that they were going into war.

‘And some were told that they were there to protect ethnic Russians in Ukraine.

The actor and film producer cited his love for Russia and the Russian people to his younger years, and spoke about his father, who was a part of the Nazi army in World War II – and handed Putin another direct message by asking why he would sacrifice his people for his own ambitions.

‘He lived the rest of his life in pain. Pain from a broken back, pain from the shrapnel that always reminded him of those terrible years, and pain from the guilt that he felt.

‘To the Russian soldiers listening to this broadcast, you already know much of the truth that I have been speaking. You have seen it with your own eyes. I don’t want you to be broken like my father.

‘This is not the war to defend Russia, that your grandfathers or your great grandfathers fought, this is an illegal war.

‘Your lives, your limbs, your futures, are being sacrificed for a senseless war condemned by the entire world.
‘Now to those in power in the Kremlin, let me just ask you, why would you sacrifice those young men for your own ambitions?

‘To the soldiers who are listening to this, remember that 11 million Russians have family connections to Ukraine, so every bullet you shoot, you shoot a brother or a sister.

‘Every bomb or every shell that falls is falling not on an enemy, but on a school, or a hospital, or a home.

‘Let your fellow Russians know the human catastrophe that is happening in Ukraine.’

Schwarzenegger began the video by explaining that he wanted it to reach his ‘dear Russian friends’ and Russian soldiers serving in Ukraine, and making them aware that there are ‘terrible things’ being kept from them by the Kremlin.

He spoke about the Russian weightlifter, Yuri Petrovich Vlasov, he met in 1961 aged 14, who after becoming the first human being to lift 200 kilograms over his head, became his ‘hero’, citing this as his lifelong love for the country.

‘My connections to Russia didn’t stop there,’ he explained, noting that it deepened when he travelled there for bodybuilding competitions and on-set for his latest films, where he got to meet all his Russian fans.

It was this personal line that Arnold took to help get the Russian viewers to trust him before continuing his plea to believe what he was telling them.

He continued: ‘Now the reason why I am telling you all of those things is because ever since I was 14 years old, I’ve had nothing but affection and respect for the people of Russia.

‘The strength and the heart of the Russian people have always inspired me and that is why I hope that you will let me tell you the truth about the war in Ukraine and what is happening there.’
Schwarzenegger’s video comes after further bombardment of Ukrainian cities continues, with capital Kyiv having been struck by missiles in the early hours of this morning.

One missile was struck down, but the wreckage still hit a 16-storey block, killing one person and sparking fires, injuring dozens of others.

Mariupol, the heavily besieged city in the south of Ukraine, also continued to come under heavy fire as city officials estimated that at least 2,400 people have now been killed there – though mayoral adviser Petro Andriushchenko said the true toll could be as high as 20,000 once cut-off areas have been searched for victims.

An estimated 28,000 Russian soldiers have been killed or wounded during the three weeks of fighting in Ukraine, as understood by US authorities.

The Pentagon estimates at least 7,000 Russian troops have now died in the fighting while another 14,000 to 21,000 have been wounded – accounting for nearly a fifth of the estimated 150,000 men that Putin amassed on the border before giving the order to attack 21 days ago.

The staggering toll is roughly double NATO losses in Afghanistan over two decades of fighting, and roughly equal to US casualties in the 36-day battle of Iwo Jima – one of the bloodiest clashes in the Pacific during the Second World War.

The number of Ukrainians fleeing from their country passed three million on Tuesday, according to the UN.

Those escaping fighting and Russian bombardment are rising in numbers after Sunday’s Russian strike on the Yavoriv military base near Lviv, with some people from western Ukraine having now joined the refugee flow across the border.