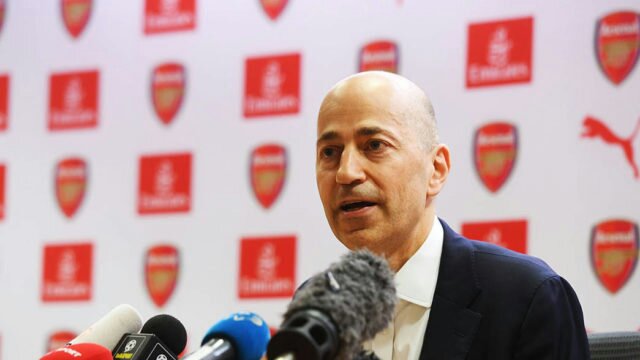 Ivan Gazidis has resigned his position as the Chief Executive of Arsenal. The club has confirmed he will leave his position on October 31.  With Gazidis leaving Arsenal have announced that head of football relations, Raul Sanllehi has been appointed as the head of football while Vinai Venkatesham, chief commercial officer is taking over has the managing director.

Gazidis, 54, has been at Arsenal since 2009 and has been instrumental in the restructuring of the club. He was behind the creation of new roles in the Arsenal backroom. AC Milan have confirmed Gazidis will be joining in December in a similar role to the one he held at Arsenal.

Gazidis claimed his resignation was the hardest decision of his life, but he believes it is the right time to allow fresh ideas to move the forward into the new era. He oversaw the hiring of Arsenal’s manager Unai Emery after the departure of Arsene Wenger.

“It has been a pleasure working with Ivan. We will miss the wisdom, insight and energy he brought to our club on a daily basis over the past decade.” Kroenke said.

“We are confident we have outstanding people in Raul and Vinai, and we look forward to working with them and coach Unai Emery to continue to move the club forward on and off the pitch.”

Club chairman Sir Chips Keswick added: “Ivan has led Arsenal with skill and dedication and leaves us in a strong position. The club has been transformed and he has recruited talented people, such as Raul, Vinai and of course Unai Emery, who will take us to future success.”