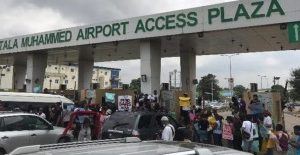 In a message obtained by Brand Spur Nigeria on Monday, Arik Air warned its passengers—particularly those leaving Lagos—that the NANS protest that took place at the airport on Monday would cause flight disruptions.

“Please be informed that you may experience disruption to your flights, especially out of Lagos, due to the protest by the National Association of Nigerian Students (NANS),” the airline in a statement said.

Assuring its passengers that it was doing everything within its capacity to mitigate the effect of the protest on its customers, the airline further gave passengers options to reschedule their flights.

In order to avoid becoming caught in traffic, commuters were urged to avoid highways leading to the airport because of the student union’s blockade, which resulted in heavy traffic.

However, as the only route to their destinations, some airport users were unable to meet up with their flight schedule, which compelled the airline to stutter their operations module.