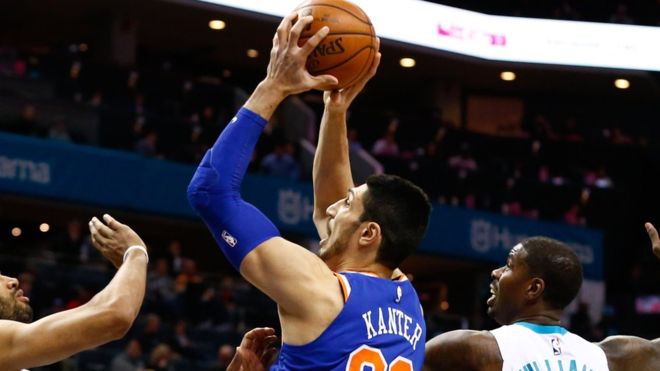 The Turkish government has issued an arrest warrant for the father of an NBA basketball player from Turkey.

Turkish prosecutors say the father of Enes Kanter, a New York Knicks player, had been in touch with members of a banned organisation.

NBA star Kanter has criticised the Erdogan government, which imposed a state of emergency after a failed military coup in 2016.

It claimed Mehmet Kanter had contacted 127 suspected members of the Gulenist groups FETO and PDY, 57 of whom used a secret smartphone app, ByLock, to communicate.

Turkey claims the app is used by followers of the exiled religious leader, Fethullah Gulen, – known as Gulenists. Gulen is regarded by his followers as Turkey’s second most powerful man.

The Gulenist movement runs schools throughout Turkey and elsewhere.

But in May 2016, the Turkish government formally declared it a terrorist organisation and accuses it of being behind the failed coup.

In a statement released on social media, Kanter defended his father and said he would “keep fighting for human rights, freedom of speech, justice and democracy.”

“Playing basketball is what I love to do, I may be equally known [these days] for being a critic of the Turkish government and its president,” he said in a video on Twitter.