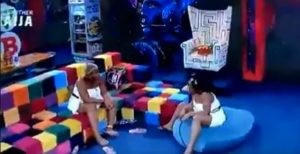 Phyna and Amaka, two of the Big Brother Naija Season 7 ‘Level Up’ housemates, have made mention of missing condoms.

They have been curious about how condoms are disappearing in the house.

Phyna, on Wednesday morning, was asking Amaka about their co-housemates that could be using condoms as she sensed that sexual intercourses must be going on in the house.

In what seemed like jealousy for not having a man to share romantic feelings with, Phyna, speaking in her preferred communication language, pidgin English, told Amaka that those engaging in the sexual affairs would be revealed.

Phyna said all the people using the condoms would be exposed during the reunion at the end of the day because everything was on tape, as Amaka listened with curiosity and laughed at the question; “Who dey use the condom? Who dey use am?”

“The condom go dey finish. Then dey replace condom. Na 13 of us dey here and condom dey finish. Who dey use am? who dey use the condom. I no kuku get man. The one wey I manage to get, na my opponent…” Phyna said.

Meanwhile, Amaka was not sleeping when Khalid and Daniella were under the duvet cuddling at night.

The issue of the disappearance of condoms is not totally strange to Africa’s most popular reality television show as Maria raised the issue in BBNaija Season 6 ‘Shina Ya Eye’.

Whitemoney asked Angel about it but she responded that she had kissed almost all male housemates, but never slept with any of them.