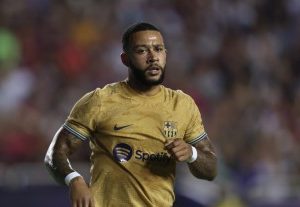 Barcelona forward, Memphis Depay has made a U-turn on leaving the club this summer.

Depay had in June ruled out any possibility of leaving Barcelona.

However, according to Spanish outlet, Mundo Deportivo, Depay is now pushing to leave Barcelona just one year after signing for them.

The former Manchester United star has accepted his time is up at Camp Nou, following the club’s heavy recruitment this summer.

Depay joined the Catalan club as a free agent at the end of his Lyon contract last summer and went on to score 13 goals in 38 appearances for the Blaugrana during the past campaign.

But Barcelona have made five signings, two of which offer extra competition for Depay in terms of making Xavi’s starting XI.

Robert Lewandowski is expected to be the centrepiece of Barca after his £42million arrival from Bayern Munich, while winger Raphinha has also joined the club from Leeds United, in a deal worth up to £55m.

Speculation on Depay’s future has heightened after he was forced to relinquish the number nine shirt at Barcelona, in favour of Lewandowski.

Depay is linked with Tottenham, Juventus, Newcastle, Lyon and Paris Saint-Germain as Barcelona are determined to let some players out of the door so they can register their new additions amid their well-documented financial issues.