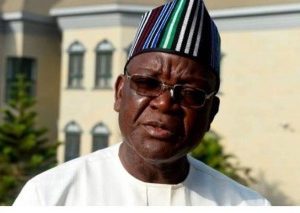 Governor Samuel Ortom of Benue state has vowed to drag the foremost Fulani socio-cultural group, Miyetti Allah, to the International Criminal Court, ICC, over invasion and killings in the state allegedly carried out by armed Fulani herdsmen.

The resolution was made known by the state’s Attorney-General and Commissioner for Justice, Mr. Michael Gusa, who hinted that killings going on in the state has escalated.

He explained that it was important for the government to take necessary action since from available records, the masterminds of genocide in the state were already known by their victims.

The Commissioner who noted a recent threat by the National Secretary-General of Miyetti Allah, Alhaji Saleh Alhassan to drag Governor Samuel Ortom before the ICC said the threat was preemptive given their fear that the state government would take the group to the court.

“I think what they said was just to preempt what the Benue State Government would do to them because we recall that they have always come up to justify and own up to the killings in the state.

“So they are only saying that (about Ortom) to preempt what the Benue State is going to do. Recall that even when the attack and attempt on the life of Governor Ortom happened, they came in to accept responsibility – the Fulani Nationality Movement, FUNAM, claimed responsibility.

“So the entire genocide and ethnic cleansing that are going on in the state have been put on their door steps. We have records of their statements and all that is needed.

“Recall that when the anti-open grazing law came into being in 2017, they came out to say that they would not obey the law. And when the implementation started, they came on New Year’s Day and killed so many people in state.

“That massacre led to the mass burial that was conducted in the state in 2018. They came and claimed responsibility because they were protesting the implementation of that law.

“So we will approach the ICC over the matter because we know our killers, we know those who are perpetrating the killings in Benue State and our people deserve to get justice,” he said.