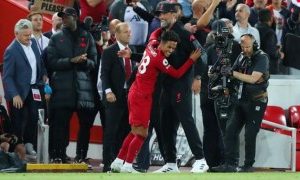 Liverpool coach John Achterberg and Newcastle head of performance Daniel Hodges have been fined and banned by the Football Association after an incident in the Reds’ 2-1 win.

Both have been banned from the touchline for one fixture and warned about their future conduct.

Achterberg, Liverpool’s goalkeeping coach, has accepted he used abusive and/or insulting gestures, while both men have admitted their behaviour was improper.

It follows a review by the FA into an incident where a Newcastle staff member appeared to throw an object towards the Liverpool technical area.