Rashford Finally Reacts To Missing Out On England Squad 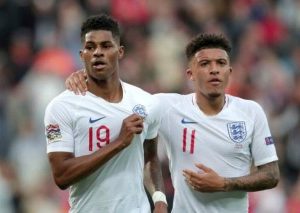 Manchester United star, Marcus Rashford, has said that the reason he was not called up to head coach Gareth Southgate’s England squad for upcoming Nations League clashes against Italy and Germany was because of an ‘untimely injury’.

Having missed out on the last two squads, Rashford was back in contention for England after a good start to the season at Manchester United.

It was reported on Wednesday night that England medicswere making late checks on Rashford’s fitness with regards to a muscular injury before his exclusion was confirmed on Thursday when Southgate announced his 28-man squad.

As a result of his exclusion from the squad, Rashford took to his Twitter account on Thursday to confirm why he won’t be featuring in upcoming games against Italy and Germany before reassuring England fans that his desire to represent the Three Lions has not changed.

Good luck to the boys later today @ManUtd. In regards to @England every player wants to represent their country and I’m no different!

“Unfortunately I’m not ready yet as I’ve picked up an untimely injury,” Rashford tweeted.