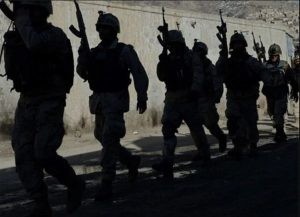 Some LAUTECH workers, as well as students, are said to be living in the community which is located off the Ogbomoso-Ilorin Expressway.

A community near the Ladoke Akintola University of Technology, Ogbomoso, has been attacked by gunmen suspected to be kidnappers.

The gunmen abducted two persons during the attack.

The PUNCH reports that the gunmen stormed the community which is located in the Surulere Local Government Area of Oyo State on Thursday night and whisked away their victims, a hotelier, and his worker.

Some LAUTECH workers as well as students are said to be living in the community which is located off the Ogbomoso-Ilorin Expressway.

A resident of the community, who spoke on condition of anonymity told our correspondent that the hotelier, his worker, and one other person were kidnapped by the gunmen he claimed are Fulani hoodlums.

The source said the community head, Chief John Adepoju, immediately sent messages to residents to remain vigilant and stay indoors after the incident.

The source said Adepoju had called a meeting of residents of the community where they would discuss the next step to take.

The source said, “The owner of the hotel travelled and returned yesterday and the incident happened not long after his return.

“The kidnappers should be about 10 from what those who were present at the scene told us and they fired several shots to scare people away and whisked their victims away.

“This problem which we were hearing of from afar has come to this area and it is unfortunate that it has become a frequent occurrence here now.”

Recall that within this month, the supervisor of late former Governor Adebayo Alao-Akala’s farm, Christopher Bakare was abducted at Jabata in Surulere Local Government Area and the owner of a private clinic identified simply as Dr Rasheed was also abducted.

Both were released by their abductors after they had paid ransoms.

The Police Public Relations Officer for Oyo State Police Command, Adewale Osifeso, is yet to confirm or deny the incident.

But the Olugbon of Orile Igbon, Oba Francis Alao, confirmed the incident to our correspondent.

He said he had got in touch with the police and the police assured him that an investigation had commenced into it.

The monarch also said the Security Adviser to the Governor, Fatai Owoseni, who is a former Commissioner of Police in Lagos State had been helpful concerning security matters in the area.

He called for reinforcement of security personnel to the area to prevent future occurrences of the incident.