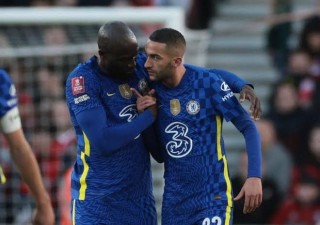 Chelsea have qualified for the semi finals of the FA Cup after overcoming Middlesbrough 2-0 on Saturday.

Boro overcame Manchester United and Tottenham to reach the last eight, but Thomas Tuchel’s Premier League side did not have such difficulties at the Riverside Stadium.

Romelu Lukaku needed just 15 minutes to open the scoring before Hakim Ziyech added a second in the first half.

Boro managed only one shot on target, which came in the 85th minute, in response.

Chelsea will now wait to find out the identity of their semi-final opponent in Sunday’s last-four draw, with the ties set to take place across April 16 and 17 at Wembley Stadium.