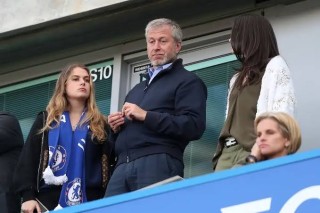 Another interested Billionaire named as to buy Chelsea FC with Abramovich considering sale.

A fast developing situation going on at Chelsea Football Club right now, which could define the future of the club entirely.

Roman Abramovich has been considering selling Chelsea FC which he has owned since 2003, and this looks largely down to pressure of his links to Vladimir Putin in the face of Russia invading Ukraine.

Reports say he is selling properties in London and looks to be cutting ties with everything he owns in the UK now, including Chelsea.

The Blues will not be short of suitors, and currently, they already have 3 bidders this week, 1 of which is Swiss billionaire Hansjörg Wyss, who has admitted that he is interested in buying Chelsea.

But another interested party is British billionaire Sir Jim Ratcliffe, as per the report below. 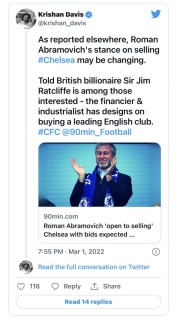 I am sure that these wont be the only 2 peoples names we hear about, with Chelsea being a very desirable purchase despite the debt the new owner will owe to Roman Abramovich.