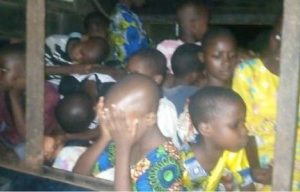 Some children who were part of the people rescued from the basement of a church, Whole Bible Believers Church, in the Ondo West Local Government Area of Ondo State on Monday declined to follow their parents home.

SaharaReporters had reported that the 77 people including 23 children and 52 adults were found in an underground apartment of the church during the weekend.

They were allegedly kidnapped and kept in the church.

While being paraded at the police headquarters, Akure on Saturday, the pastor in charge of the church, David Anifowose, had said he received the instruction from God that they should camp in the church until his second coming.

However, the children refused to follow their parents after they were handed over to them by police command at the state headquarters in Igbatoro.

The children were said to have insisted that they would not leave the station until the arrested pastor and others were freed.

While lamenting that the children had been hypnotised with what they described as black magic, the parents maintained that the victims should be thoroughly examined psychologically.

A father of one of the victims said 21-year-old daughter, identified as Priscilla, had refused to eat since Saturday claiming that the pastor must be released.

The Police Public Relations Officer in the State, Funmilayo Odunlami, confirmed the development.

She said, “Despite all our attempts and placation some of the victims refused to go home, saying there were going to stay here. We have a child who said she will follow the Lord and not her parents.

“She said she was okay staying within the police compound since their pastor is still here.

“We are trying to work out a modality on how the Ministry of Women Affairs in the state can rehabilitate them.”