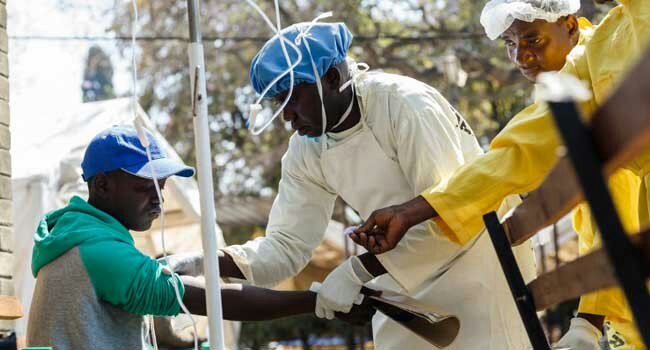 A nurse takes care of a cholera patient during a visit of Zimbabwe Minister of Health, at the cholera treatment centre of the Beatrice Infectious Diseases Hospital, in Harare, on September 11, 2018.Jekesai NJIKIZANA / AFP

The death toll in Zimbabwe’s cholera outbreak has risen to 28, state media said Sunday, as the health minister announced new antibiotics were being used after the disease strain was found to be resistant to some drugs.

The cholera outbreak, first detected in a township outside the capital Harare earlier this month, prompted the government to declare an emergency in the city after at least 3,000 cases were reported.

“Although I cannot say we have contained the disease as yet, we are moving swiftly in all provinces of the country,” health minister Obadiah Moyo told the state-owned Sunday Mail.

Moyo said rubbish dumps would be removed from high-risk areas of Harare, sewer pipes would be repaired and street food vendors had been ordered to halt work.

Authorities have banned public gatherings in the city as a health measure, forcing the opposition MDC party to call off a major rally on Saturday.

The cash-strapped country, which was ruled by Robert Mugabe from independence in 1980 until his ousting last year, suffered its worst cholera outbreak in 2008.