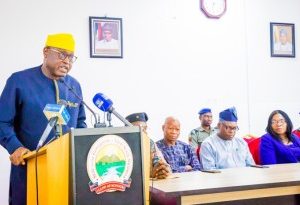 The Election Petition Tribunal has adjourned judgment to a date to be communicated to parties on the dispute arising from the governorship election held on 18th June, 2022 in Ekiti State which produced Governor Biodun Oyebanji as the winner.

The Chairman of the three-member panel hearing the case, Justice Wilfred Kpochi, reserved judgment for a later date after all parties before the jury adopted their final written addresses at the sitting held inside a packed courtroom on Wednesday in Ado Ekiti, the state capital.

At the adoption of written addresses, Governor Oyebanji, his party, the All Progressives Congress (APC) and the Independent National Electoral Commission (INEC) urged the Election Petition Tribunal to dismiss the petition filed by the Social Democratic Party (SDP) governorship candidate, Chief Segun Oni.

Oyebanji maintained that Oni and his party, the SDP, have failed woefully to sufficiently discharge the burden of proof on them to convince the Tribunal that the election did not comply with the provisions of the Electoral Act and the Constitution of the Federal Republic of Nigeria 1999 as amended.

Oni and the SDP are the 1st and 2nd Petitioners in case. The Respondents are Oyebanji (1st), the APC (2nd), Yobe State Governor Mai Mala Buni, in his capacity as the Chairman of the APC Caretaker Extraordinary Convention Planning Committee (3rd), INEC (4th) and the Deputy Governor, Mrs. Monisade Afuye (5th).

Oyebanji and Afuye (1st and 5th Respondents) through their counsel, Prof. Kayode Olatoke (SAN), told the Tribunal that their written address was dated 29th October and filed on 30th October and adopted same before the Tribunal as evidence that the election of his clients be affirmed.

The Governor and the Deputy Governor further told the Tribunal through their counsel that they filed their reply on point of law which was dated and filed on 11th November upon the receipt of the Petitioners’ written address.

While seeking the leave of the Tribunal to adumbrate on some points, the 1st and 5th Respondents through their counsel argued that it is trite in law that the burden of proof is strictly on the Petitioner(s) in election petition cases noting that “in the instance petition, the Petitioners failed woefully to discharge same.”

They said: “He (Oni) has not been able to prove that the 1st Respondent (Oyebanji) was not qualified to run for the Office of the Governor at the last governorship election. They (Oni and the PDP) called PW 4 (Petitioners’ Witness 4) as a witness, the PW 4 admitted that the 1st Respondent and the 5th Respondent were qualified under Section 318 of the Constitution of the Federal Republic of Nigeria.

“INEC has power to accept candidates who are qualified to run for the office of the Governor and once INEC says you are qualified, you are can run. We rely on the Waziri Ibrahim case. Their (Petitioners) witness, PW 4 said they were qualified.

“As for the 5th Respondent, the Petitioners made a heavy weather of her alleged non-qualification. They have not proved it and their argument is not in line with our jurisprudence of today. There is no prayer before theTribunal sufficient to allege that she is not qualified and there is no relief against the 5th Respondent in this petition.

“They have also failed to bring the person before the Tribunal to prove thay she is not the owner of the certificates. They rely on PDP v Degi Eremiuyo & Ors on issue of different names on different documents as this has been watered down by the Supreme Court in the case of Obezim v Elebede as reported in 2022 4 NWLR pt 1819 pg 1 @ 52-53.

“I therefore urge my Lords to hold that the Petitioners have failed to prove their case and dismiss the petition with substantial cost.”

Counsel to the 2nd Respondent, Chief Akinlolu Olujinmi (SAN) told the Tribunal that the written address of his client, the APC, was dated 29th October and filed on the same day while the reply on the point of law was filed on 10th November on receipt of the Petitioners’ written address.

While adopting the APC’s written address and reply on point of law, Olujinmi urged the Tribunal to dismiss the petition in its entirety on grounds that it lacked merit.

The 2nd Respondent argued that it was too late for the Petitioners to abandon the two grounds because “it was a clear admission that they (Oni and the SDP) have failed to prove the two grounds adding that several grounds of the petition would have to go along with the two grounds.

“The Ground 1 they abandoned is about the allegation that the 1st and the 5th Respondents did not score the majority of lawful votes cast. In effect, they (Oni and the SDP) are saying there is nothing wrong with the votes that are lawful.

Arguing on the introduction of Mala Buni into the petition, the APC through its counsel pooh-poohed the arguments of the Petitioners by saying that the case of Jegede v INEC cited by them has been settled by the Supreme Court that the grounds the Petitioners rely upon cannot disqualify a candidate.

Counsel to 3rd Respondent (Buni), Mr. Shaibu Aruwa (SAN) told the Tribunal that that the written address of his client was dated 30th October and filed on the same day while the reply on the point of law was dated 10th November and filed on 11th November.

In adopting the written address and the point of law and replying on them as evidence before the Tribunal, Aruwa prayed the panel to dismiss the petition “with substantial cost.”

By way of amplification, Aruwa argued that the Petitioners made a mistake by joining the 3rd Respondent (Buni) noting that if it were to be in those days, the petition would have been dismissed without calling any witness.

Aruwa concluded his argument by saying that “the Petitioners must pay the cost before they have the right of appeal.”

In adopting INEC’s written address and reply on point of law, Onwugbonu urged the Tribunal to dismiss the petition with substantial cost.

Ajayi told the Tribunal that the written address of the Petitioners was dated 5th November and filed same day seeking leave of the Tribunal to grant all the reliefs contained therein.

The Petitioners’ counsel made an oral application to amend a typographical error in response to the 2nd Respondent’s address as contained in Point 2.09 on Page 4 in which the relied on Grounds 1,2 and 4 urging the Tribunal to strike out the paragraphs with errors

Ajayi countered Olujinmi by saying he had not withdrawn Ground 1 in the petition as claimed by the 2nd Respondent’s counsel.

Olujinmi also faulted the oral application on ground that the Petitioners’ counsel did not deem it fit to file same pursuant to Paragraph 47(1) of the Fourth Schedule of the Electoral Act 2022 which he said has negated the application urging the Tribunal to dismiss the application.

Counsel to Oyebanji and Afuye, Olatoke in opposing the application, said it is trite that when parties have joined issues, any amendment must be preceded by withdrawal of the defective application.

Counsel to Buni, Aruwa argued that the Petitioners failed to comply with the relevant Paragraph of the Fourth Schedule of the Electoral Act and neither sought the leave of the Tribunal to bring the application.

INEC counsel, Onwugbonu joined others to oppose the application because it was out of time adopting the submissions of his colleagues who.had earlier addressed the Tribunal on the issue.

Responding, Ajayi described the objections of the Respondents’ lawyers as “most mischievous and unnecessary.” He maintained that written addresses are not affidavits hence they could be amended orally.

Ajayi added that the Respondents have not suffered any injury by the said typographical error urging the Tribunal to discountenance their objections.

The Tribunal Chairman, Justice Kpochi, reserved ruling on the application to the day of final judgment on the petition.

Continuing his replies to the addresses of the Respondents one after the other, Ajayi urged the Tribunal to discountenance their written addresses.

Speaking specifically on why the Petitioners abandoned Ground 3 of the petition, Ajayi said the 4th Respondent (INEC) “did everything to frustrate Oni and the SDP and withheld documents needed to file the petition.

On the challenge to discharge the burden of proof, Ajayi said carrying out the task it is not static whether in civil cases or criminal matters.

Speaking on the case of the 5th Respondent (Afuye), Ajayi maintained that the burden of proof is on her saying she refused to offer any evidence of rebuttal.

According to Ajayi, the case of Obezim v Elebede referred to by counsel to the 1st and 5th Respondents did not help their case adding that the 3rd Respondent’s reference to Section 308 of the Constitution is not applicable in the instant case.

He urged the Tribunal to grant all the reliefs sought by the Petitioners urging that Oni be declared as the lawful winner of the 18th June governorship election.

The Tribunal Chairman thanked all lawyers, parties and members of the public for their cooperation throughout the trial of the case saying the date of the judgment would be communicated to them in due course.