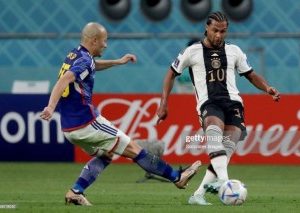 A superb second half display by Japan saw them come from behind to defeat Germany 1-2 in a World Cup group E clash at the Khalifa International System in Al Rayyan.

Germany’s World Cup campaign got off to the worst possible start after losing 1-2 to Japan in their opening group game. Hansi Flick’s men dominated the first half and Gundogan’s 33rd minute penalty gave them a half-time lead. Havertz had a goal disallowed by VAR just before half-time and that proved to be crucial. Japan were a different side in the second half and the attacking subsititutions were key as Doan and Asano netted in the last 15 minutes to shock Germany. Flick’s side could now be eliminated in the group stages for the second World Cup running.