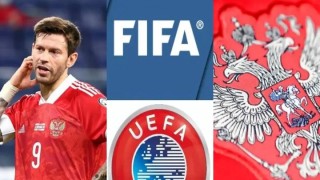 The world and European football governing bodies said they would be banned “until further notice”.

It means the Russian men’s team will not play their World Cup play-off matches next month and the women’s team have been banned from this summer’s Euro 2022 competition.

Spartak Moscow have also been kicked out of the Europa League and their last-16 opponents RB Leipzig will advance to the quarter-finals.

“Football is fully united here and in full solidarity with all the people affected in Ukraine,” Fifa and Uefa said in a joint statement.

“Both presidents hope that the situation in Ukraine will improve significantly and rapidly so that football can again be a vector for unity and peace amongst people.”

The Russian men’s team had been scheduled to face Poland in a World Cup play-off semi-final on 24 March.

Russian football’s governing body, the RFU, said it “categorically disagreed” with the decision and would challenge it “in accordance with international sports law”.

Fifa had previously ruled that Russia must complete their upcoming games in neutral territory, under the title Football Union of Russia, and without their flag and anthem.

However, the announcement drew criticism – and Scotland and the Republic of Ireland joined several other nations, including England, Northern Ireland and Wales, as well as Poland, the Czech Republic and Sweden, in refusing to play against Russia.

Russia are in Northern Ireland’s European Under-21 Championship qualifying group and their meeting in March will be cancelled.

On Monday, Scottish FA president Rod Petrie wrote to his Ukrainian counterpart “to send a message of support, friendship and unity”, with those two nations due to meet in their World Cup play-off semi-final on 24 March.

The 2022 Champions League final, originally due to be played in St Petersburg on 28 May, has been moved to Paris while numerous clubs have taken their own steps to disassociate themselves from Russia.

Manchester United has terminated its sponsorship deal with Russia’s national airline Aeroflot while Bundesliga club Schalke has cancelled its partnership with main sponsor Gazprom, having last week removed the Russian energy company’s logo from its shirts.

“I can’t understand why it took them 24 hours to make this decision,” said Jim Boyce, former Fifa vice-president and honorary life president of the Irish FA, speaking to BBC Radio Ulster.

“What is happening is absolutely deplorable. Quite honestly, every possible sanction that can be imposed on Russia at the minute has to be done. I applaud Fifa and I applaud Uefa for the decision that they have made today.”

Speaking on Monday, Tottenham manager Antonio Conte said: “The whole world has to be compact and show [it is] solid against the stupidity of the people.”

He added: “I think it’s right to express our disappointment about the stupidity about some decisions. Football and Uefa has to be compact and to show to be strong.”

This is the strongest move yet taken by the international football community.

Russia is rapidly being reduced to the status of international sporting pariah. Of course this comes after Fifa was accused of not going far enough on Sunday instead allowing Russia to continue playing as ‘RFU’ with a ban on its flag and anthem.

The IOC heaped pressure on football by recommending that all sports enforce a total ban on Russia and Belarus.

This will undeniably prompt other sports to follow football’s lead.

There will also be those who say that the IOC could have gone further and say that ‘this is a decision, we are commanding all sports to ban Russian athletes’.

Whether they thought they had grounds to do so, legally, is another matter.

Some will also point to the Sochi 2014 Games and World Cup 2018 that Putin’s Russia was able to host and ask if this is all too late.

It said there had been a “breach of the Olympic Truce” by those countries’ governments.

“While athletes from Russia and Belarus would be able to continue to participate in sports events, many athletes from Ukraine are prevented from doing so because of the attack on their country,” an IOC statement read.

The International Paralympic Committee is to meet on Wednesday to discuss Russia, with the Winter Paralympics set to start two days later.

The British Paralympic committee has called on Russians and Belarussians to be kicked out of the Games.

The British Olympic Association, along with the National Olympic Committee (NOC) of Germany, has demanded the immediate exclusion of Russia and Belarus from international sport.

The IOC said in their recommendations that wherever it was not possible to ban them from competing for organisational or legal reasons, such athletes should not compete under the name Russia or Belarus and should be classed as neutrals.

The Russian Olympic Committee has disagreed with the IOC, saying the decision “contradicts both the regulatory documents of the IOC and the [Olympic] Charter”.

What else is happening in sport?
The Russian Formula 1 Grand Prix, due to take place on 25 September in Sochi, was cancelled last week.

The sport’s governing body, the FIA, will meet on Tuesday to “discuss matters relating to the ongoing crisis in Ukraine”.

Badminton’s world governing body (BWF) responded to Russia’s invasion of Ukraine by announcing the cancellation of all tournaments in Russia and Belarus in addition to banning the national flags and anthems of the two nations.

“BWF will continue to monitor the situation closely and will proactively consult our international sport movement partners to discuss other options to potentially strengthen measures against the governments of Russia and Belarus,” it said.

The Ukrainian Tennis Federation has called on the sport’s governing body, the International Tennis Federation (ITF), to expel Russia and Belarus from the organisation and ban Russia from individual and team tournaments.

Ukrainian Elina Svitolina has said she will refuse to play Russian or Belarusian players until they are classed as ‘neutral athletes’.

The world number 15 is due to play Anastasia Potopova of Russia at this week’s Monterrey Open but has threatened to withdraw unless the Women’s Tennis Association takes action.

Russian Daniil Medvedev, who became the ATP’s world number one on Monday, said he wanted to promote “peace all over the world” in a news conference on Friday during the Mexican Open.

The ITF said: “This is a fast-evolving situation; we are in active discussion with the ITF tennis family and the ITF board to decide and align around our next course of action.”

At the Fencing World Cup in Cairo on Sunday, Ukraine’s men’s foil team refused to fence against Russia.

Ukraine’s Klod Younes told BBC Radio 5 Live that he and his team-mates now intend to return home and defend their country.

“I knew before the competition [that I would not fence against them]. I told my team-mates and they supported me and said they would do the same,” Younes said.

“Today we are going to try to re-book our ticket and we will try to go to Poland, to Hungary, and then we will figure out what to do.”

On whether he and his team-mates will fight if necessary, he added: “Of course. This is our country. This is my country. I have to fight for it. I am defending my territory.”

The government has urged sports to continue with “visible signs of solidarity” with Ukraine and says it plans to talk with international counterparts later this week to mobilise further support to ostracise Russia from international sport.