Turkish President Recep Tayyip Erdogan insisted on Monday his country “won’t give up” on its relations with either Russia or Ukraine, but says it will implement an international convention that allows Turkey to shut down the straits at the entrance of the Black Sea to the warships of “belligerent countries.”
The 1936 Montreux Convention gives Turkey the right to bar warships from using the Dardanelles and the Bosporus during wartime. 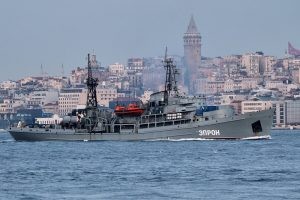 Ukraine has asked Turkey to implement the treaty and bar access to Russian warships.

Several Russian ships have already sailed through the straits to the Black Sea in the past weeks and it was not clear how much of an impact Turkey’s decision to close down the straits would have on the conflict.

The convention, also provides an exception for Black Sea vessels returning to port.

Turkey has criticized Russia’s military aggression in Ukraine, but has also been trying to balance its close ties to Ukraine with its interests in not upsetting its fragile economic relationship with Russia.