Gani Adams On Fulani Herdsmen Killings: “What Yorubas Will Do Best” 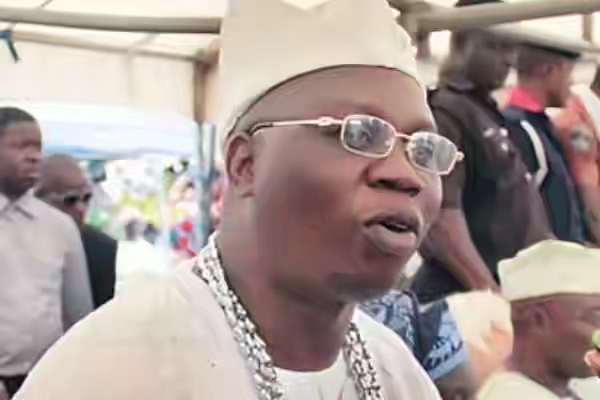 Gani Adams, Aare Ona Kakanfo of Yorubaland, has boasted that the people of the South West would resist any attempt by herdsmen to turn the region into a killing field.

He spoke while lamenting the number of lives lost to the activities of herdsmen across the country.

Adams also called on President Muhammadu Buhari to urgently mandate security agents to, “arrest the blood-thirsty maniacs on the rampage in the country, masquerading as herdsmen, and bring them to justice, to avoid a total breakdown of law and order.”

The Aare Ona Kakanfo stated this in ‎a statement by his Special Assistant on Media, Kehinde Aderemi.

He also condemned the killing of the Officer-in-Charge of the Special Anti-Robbery Squad (SARS), Saki Unit, of Oyo State Police Command, by herdsmen.

The statement reads, “The first fundamental right of a Nigerian is the right to life. It is when you are alive that you can enjoy other rights. Once this right is taken away from you through killings and murder, you cannot enjoy any other right. Nigerians demand Right to Life. More than a thousand Nigerians have been killed in the last one year. Is Nigeria at war? There is more to all these killings.”

“The diplomacy of the Yoruba on national issues, especially when it borders on security, should not be misconstrued for cowardice. It is part of our nature to accommodate people from other ethnic nationalities but now, our people cannot go to their farms again because of the fear of the unknown. The Federal Government must immediately check activities of these killers to avoid plunging the country into an avoidable war.

“There is no war in Nigeria, there is no famine, no earthquake, but the number of IDPs in the country is more than what obtains in a country where war is going on. Murder of Nigerians, including pregnant women and children continues everyday. What is really going on?

“Perception is everything. The Federal Government is not helping its own image with the belief by Nigerians that the presidency is always silent when the issue concerns Fulani herdsmen.

“Let me remind the government that killing and murder remain serious crimes in our law books. No level of politics can change this. Nigerians are being killed and the government seems helpless. Utterances from government officials such as the Defence Minister, Brig–Gen. Mansur Dan–Ali (retd), and the Inspector-General of Police, Ibrahim Idris, are not helping matters. One wonders if we are in the same country.

“Peace and security cannot be guaranteed where there is no justice. To enforce the law, security agents must ensure justice for all and sundry. Nigerians were shocked to wake up on New Year Day and hear the news of killings in Benue State. Now, Nigerians living in Nasarawa, Taraba, Adamawa, Kogi and others don’t feel safe. Senseless killing is like cancer and if not quickly checked, the situation can lead to a complete breakdown of law and order because Nigerians have the right to defend themselves.

“Historically, the Yoruba are known to have the capacity to defend themselves. These killers are testing waters by burning the farm of Chief Olu Falae and invading the farms of prominent people in the South-West. We will no longer accept activities of this murderous gang in Yorubaland. Enough is enough”.