How Navy Foiled Attempt To Smuggle 351 Bags Of Rice, Illicit Drugs Into Nigeria 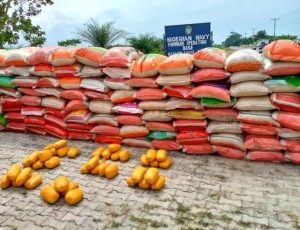 Some attempts by some criminals to smuggle 351 bags of foreign rice worth millions of naira into Nigeria, through the Badagry/Port Novo waterways have been foiled by Naval personnel attached to the Forward Operating Base, FOB, Badagry, Lagos.

Also, 40 packs of Cannabis Sativa weighing 21 kilograms were seized in the Badagry area of the state.

In his remarks during the handing over of the recovered contrabands, Commanding Officer, FOB, Captain James Otache, said no arrest was made as the suspects fled on sighting the naval patrol team approaching.

He said the seizures were made in the last five months, both on land and on the waterways.

According to Captain Otache, “In line with extant regulations and harmonised standard operating procedures, it is expedient that the items are handed over to the appropriate prosecuting agencies – the Nigeria Customs Service and the National Drug Law Enforcement Agency,NDLEA.

So far we haven’t arrested anyone. Our duty is to arrest and hand them to the appropriate prosecutor agencies to take necessary action.

While appreciating the Chief of Naval Staff, Vice Admiral Awwal Gambo for his support to the FOB, Captain Otache, said the base would continue to “mount aggressive patrol until smuggling of this kind is brought to an end and we will sustain our efforts until we see to that”

Receiving the impounded illicit substance, the Assistant Superintendent of Narcotics, NDLEA, Hassan Ismail, attributed the seizure to an attestation of the synergy among the Navy, Customs, Army and the NDLEA.

He stated that the anti-narcotic agency had resolved to stop at nothing in arresting drug barons.

Also receiving the bags of foreign rice, Deputy Comptroller Enforcement, Nigeria Customs Service, Sunday Enogela said the service’s determination to nip activities of criminals who indulge in illegal importation of agricultural produce, including rice to the barest had led to several arrests in time past. He commended the FOB for the feat.