Imo Governor, Uzodimma Reveals Cause Of Deadline Attacks In His State 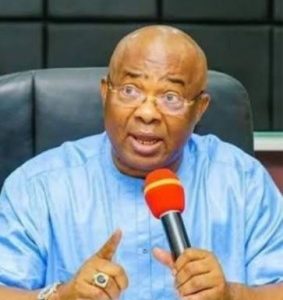 The Governor of Imo State, Hope Uzodimma has revealed those behind attacks in Imo state.

According to him, the attacks on security personnel and installations as well as on residents of the state is as a result of political bitterness.

He also asserted that the attacks enjoyed the support of the people when they began two years ago.

The governor said the residents of the state welcomed the continuous attacks with applause, taking them as a form of entertainment, until people began to get killed.

Uzodimma made these assertions in an interview Tuesday night on Channels Television’s Politics Today monitored by our correspondent.

“Some of these crimes are being supported. Recall that two years ago when this started in Imo State, when the bandits attacked police stations, as they were leaving the scene of crime, people would be clapping for them. People would be laughing with them. The people took this thing as a form of entertainment.

“So, we took personal interests to begin to investigate the reasons behind these. I told you times without number in Imo State, some of the cases of banditry here are politically contrived. Some are real attacks by bandits.

“So, I think that the kind of politics with bitterness that is going on in the state and some parts of these regions should really be condemned. That is why we have decided to embark on both kinetic and non-kinetic approaches. We’ve engaged community leaders, we’ve engaged vigilante approach, we’ve engaged people in dialogues, getting traditional leaders to embark on reconciliation, addressing the political grievances of some politicians who have not been able to manage the defeat of losses from the last election.

“But we are on it. I think we are getting close to a final solution to the issues of banditry, kidnapping and these sorts of crime in Imo State.”

Uzodimma further said Nigerians had not been able to learn how to manage political defeat since 1999. He stated that the nation’s democracy was “highly threatened” because of this.

“People are not doing politics with the spirit of sportsmanship as it is practised in other climes,” the governor said.

“People are so bitter when they’re not able to have their way, and they can go to any length to ensure that individual or personal interest is achieved,” Uzodimma added.