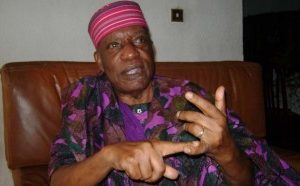 Duro Onabule, the former spokesman to former military President, Ibrahim Babangida, has passed on at 83.

The veteran journalist died on Tuesday, hours before Babangida clocked 81.

Onabule was the national editor of National Concord from 1984 to 1985 becoming being appointed chief press secretary to Babangida.

The cause of his death was unknown as of press time.