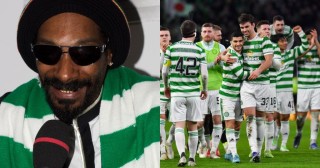 Calvin Cordozar Broadus Jr, known in showbiz as Snoop Dogg has pledged to celebrate with Celtic if they win the Scottish Premier League. Snoop Dogg has not hidden his love for the Scottish giants and has been following the Hoops religiously this season. After Celtic defeated arch-rivals Rangers FC in the Old Firm derby, the rapper expressed delight in the victory and sent a message indicating he is ready to ‘party’ with them if they end the campaign successfully.

“My Bhoys are not there yet but after their win against Rangers, they are getting close to winning the championship,” he told Daily Record as quoted by Daily Star.

“As soon as they are champions, you better believe I am on that flight to Glasgow.

“The night is going to go off and whatever they want to do, it’s all going to be on Snoop.”

The Parkhead outfit currently sit top of the Scottish Premier League table with a six points lead over Rangers, their main rivals. League leaders Celtic defeated Rangers 2-1 in the Old Firm derby before thrashing St Johnstone 7-0, and are on course to wrestling the title back.

Earlier, Sports Brief reported that the game between Rangers vs Celtic is one of the most exciting rivalries in football history. It is commonly referred to as the Old Firm derby.

Join us as we delve into the history of the two clubs, their head-to-head record, and much more. The Old Firm derby began back in 1888 when Celtic beat Rangers 5-2 in a friendly match at the old Celtic Park. So, how have the Rangers vs Celtic results been since then?.