Man Arrested For Poisoning His Own Wife And Her Friend

The suspect’s brother, Benard Mungai Kamande, told the police that he received a call on the day of the incident from his brother who told him to rush to his house within Dandora phase 1. 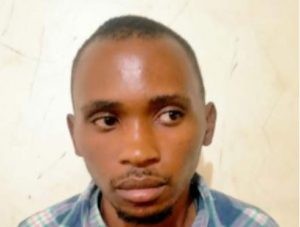 Sebastian Kamande, a Kenyan man has been arrested for poisoning his wife, Rahab Gathoni and her friend Abigael Gathoni, before fleeing their home on Tuesday, March 29.

Detectives from the Directorate of Criminal Investigations (DCI) arrested Kamande 28, around Sagana community of Kenya as he was travelling back to Nairobi from where he had been hiding.

The suspect’s brother, Benard Mungai Kamande, told the police that he received a call on the day of the incident from his brother who told him to rush to his house within Dandora phase 1.

He only told him that there was a problem and feared that the house could be burgled. He rushed to the house and found the two lying on a mattress in the living room, with blood oozing from their mouths and ears.

Detectives drawn from the Crime Research and Intelligence Bureau (CRIB), DCI Nairobi Regional headquarters launched investigations and initially traced him to Dandora. He however escaped the dragnet.

Detectives later traced him in Embu but as they headed there, he got wind and started travelling back to Nairobi. He was however arrested in the vehicle he boarded.

K24TV reported that the preliminary investigations revealed the couple had marital disagreements and had last weekend travelled to the man’s parents in Kakuzi, Murang’a County, in a bid to salvage their union.

A statement from the DCI read in part; “But when they returned to their home in Dandora, the man’s wife who had since received a visitor declined to cook, prompting the disgruntled husband to venture into the kitchen”

After preparing rice and beef, the man laced it with an unspecified poison and served the two women before fleeing. He is expected to be charged to court on murder charges this week.