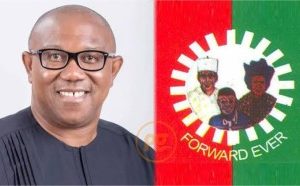 The former secretary of the ruling All Progressives Congress (APC) in Cross River State, Dr. Ntete Bassey Duke has deserted the party.

He, alongside other APC chieftains in the state and 50 supporters, has now registered with Labour Party.

Bassey Duke and his supporters were received by the state chairman of LP, Ambassador Ogar Osim in the presence of other members of the state executive.

Ntete, a former Buhari Campaign Director-General in 2015, said APC is steadily collapsing and it is impossible to resuscitate the party.

“I had to look elsewhere from APC because as it is that party is steadily crumbling.

“I doubt much that that party will be able to recover with the way things are going,” he said.

He thanked the leadership of LP at the national and state level for bringing a platform where many Nigerians that feel uncomfortable in their parties can always move to alternative platforms and contribute their quotas to national development.

Ogar Osim congratulated Ntete and his supporters and assured them that LP is the democratic platform Nigerians are yearning for.

He assured that with the mass registrations being recorded daily in the party in the state, they are going to spring positive surprises during the general elections next year