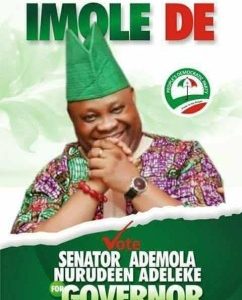 Ataoja of Osogbo, Oba Jimoh Oyetunji, on Tuesday placed a curse on those orchestrating attacks on people hiding behind politics in the town.

Before the arrival of Adeleke at Ataoja’s palace, it was learnt some members of the party were attacked by suspected hoodlums around Isale-Osun area of Osogbo, Osun State.

Ataoja who spoke in Yoruba Language in the video clip of the incident obtained by our correspondent could be seen being restrained from speaking further by some of his chiefs.

However, he declared that action would be taken to stop violence in his domain.

He said,”Anybody who wants to cause violence in Osogbo will know peace.

“Let Asiri Eniba (Kazeem Oyewale) know this fact. Not after begging the chieftaincy title of Ataoja, you will now be acting with impunity.

“I will take action to prevent violence in Osogbo. Oyetola and APC came to the palace, PDP did not disturb nor waylay them. Be careful, it is the PDP that installed me as a monarch. Leave me, let me talk.”

When contacted for more clarification on the attack referred to by the monarch, the Director, Media and Strategy of Osun PDP, Oladele Oluwabamji, said some members of the party, heading to Ataoja’s palace to receive Adeleke were attacked around Isale-Osun area of Osogbo.

According to him,APC orchestrated the attack to scare supporters of the party and prevented them from receiving Adeleke, who was visiting the Ataoja.

He further alleged,”The APC thugs attacked our supporters on their way to the palace of Ataoja of Osogbo around Isale-Osun area.we don’t know how many people got injured yet.

“Whenever APC is involved in any kind of criminal act, they will always want to put up Alibi and create scenes.

“I have seen the video (of an attack) they were trying to push. If you subject it to Google Verification, I am sure APC will be defeated in that argument