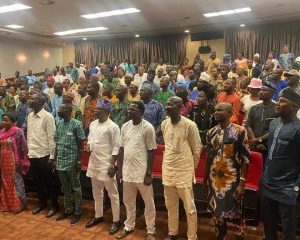 No fewer than 234 former local government administrators in Ogun State have on Monday joined the Peoples Democratic Party (PDP).

The former Vice Chairmen, Councillors, and Secretaries to the Local Government (SLG) decamped from the ruling All Progressives Congress (APC) to team up with the opposition party.

Receiving the defectors on Monday, the PDP governorship candidate in Ogun, Hon. Ladi Adebutu, assured them that they would be treated well as bona fide members of the PDP in Ogun.

According to Adebutu, the PDP would return power to the local governments if given the opportunity to take over governance in 2023.

He charged the former APC members to work assiduously towards sending out the APC, saying Ogun State must be brought back to the days of glory where people enjoyed peace, food security, good health, and infrastructural development among others.

Also, the deputy governorship candidate of the PDP in Ogun, Hon Adekunle Akinlade, expressed confidence that the PDP would take over from the APC in the next election.

Akinlade maintained that the forces coming together are doing so to oust the ruling party and reset the Gateway State towards the right path.

In his words, the Chairman of the party, Hon. Sikirulahi Ogundele, welcomed the decampees to the PDP, telling them that they would not regret their decisions to do so.

He urged the people of Ogun State to get their Permanent Voter’s Card ready for the 2023 polls, saying “your votes cannot be stolen anymore.”

In their separate remarks, Hon. Sogo Akinde, Hon. Arowosegbe Rasaq, Hon. Oyedele Azeez, Hon. Femi Olumide Lijadu, Hon. Emmanuel Olayinka and other decampees promised to work for the victory of the party in 2023.

They vowed to do everything within the ambit of the law to wrest power from the APC, urging the PDP leadership to ensure equal treatment for all.

The former local government office holders stressed that the days of the APC are numbered in Ogun State.