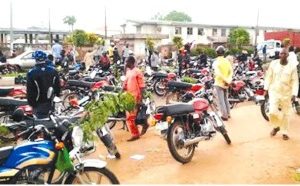 It was serious pandemonium that broke out in Fagba, Iju area of Lagos, yesterday.

The pandemonium broke out following a protest by commercial motorcyclists over the alleged killing of two of their colleagues by the Police.

At press time, details of the circumstance that led to the killing could not be ascertained, but sketchy information at Vanguard’s disposal said it would not be unconnected with the enforcement on the ban of motorcycles on some routes in Lagos.

A resident of Iju, who was driving home last night, alerted Vanguard at about 8.30pm, saying: “I just received a call from my wife not to drive through Fagba as okada riders numbering over 5,000 laid siege to the police station at Fagba, threatening to burn it down. They alleged that the Police killed two Okada riders.”

When Vanguard contacted the Lagos State Police Public Relations Officer, SP Benjamin Hundeyin, he said he was yet to get details from the Division Police Officer of the area.