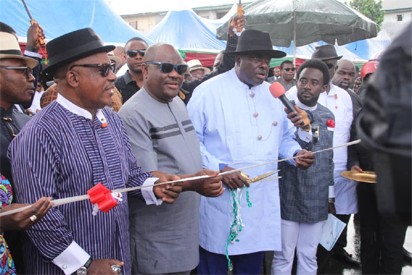 ABUJA- The controversy surrounding the choice of a venue for the Peoples Democratic Party, PDP, national convention was yesterday laid to rest following the adoption of Port-Harcourt, the Rivers state capital by the National Executive Committee, NEC, meeting of the party.

Briefing newsmen at the end of the 82nd NEC Meeting, National Publicity Secretary of the party, Kola Ologbondiyan said all Presidential aspirants were assured of a credible and transparent primaries, adding that they have all accepted to go to Port Harcourt for the big event.

According to the publicity scribe, NEC also called for the resignation of Professor Mahmood Yakubu for alleged connivance and manipulations of the electoral process in Thursday’s re-run governorship election in Osun state.

He said, “The NEC has approved the budget for the 2018 national convention which will hold in Port Harcourt, Rivers state.

“NEC further resolved that we will be committing all our presidential aspirants to a bond on the outcome of the election. What this translates into is that all our aspirants will sign an agreement with our party in order to ensure that the outcome of the national convention which the party has promised to be transparent, free, fair and acceptable to Nigerians, must be accepted by all our aspirants.

On why the party caved in to Governor Wike’s threat, Ologbondiyan said the party resolved the issue, using its internal conflict resolution mechanisms.

The PDP spokesman further said, “NEC warned against allowing the current INEC leadership under Professor Mahmood Yakubu to continue in office as it has shown it cannot conduct a free, fair and credible election at any level.”

It would be recalled that earlier in the week, Governor Wike threatened to deal with the PDP should it bow to pressure to move the convention away from the Rivers state capital.

The leadership of the party not prepared to go to the convention with divisions within its rank, aligned with Wike; a development that is expected to strengthen the party ahead of the October 6th convention.

A party official told our correspondent that shortly before Port Harcourt was agreed upon to host the convention, Governor Wike apologized for his outbursts and pleaded with party leaders to gloss over the threats.

Speaking on condition of anonymity, the official recalled that the Rivers state governor promised to play a good host not only to the aspirants but to the over 3,690 delegates expected at the Garden City.

Also speaking at the end of the meeting, Governor Fayose told newsmen that “all grey issues were resolved,” stressing that “most popular among these grey issues is the venue of our national convention and we have successfully resolved this. We have taken a position that the convention will hold in Port-Harcourt, Rivers state.”

Beyond this, there were assurances of free, fair election and that the aspirants will accept the outcome of the result.

On his part, Atiku dismissed reports that he was against the choice of Port Harcourt, saying the Rivers state capital is like a second home to him.

Meanwhile, some leaders of the party are not happy with the electoral fortune of the party since the assumption of the Prince Uche Secondus-led National Working Committee.

A source told Saturday Vanguard that some leaders are not happy that while the Osun state governorship election was going on, “The chairman was in the United States.”

He said, “You could see how the APC national chairman led his party leaders including some governors in the negotiations with Senator Iyiola Omisore. In our case, only Saraki and one or two leaders met with the Senator to negotiate on behalf of the party. We saw what happened in the re-run.”