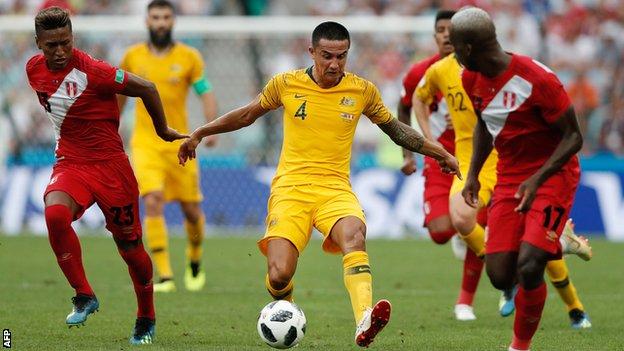 Peru recorded their first win at a World Cup finals since 1978 as they beat Australia in the last match of the tournament for both sides.

Australia needed to defeat already-eliminated Peru and hope France beat Denmark in order to reach the last 16, but the South Americans went ahead with a fine, low 15-yard volley from Andre Carrillo.

Peru captain Paolo Guerrero, only able to play in the tournament after a tribunal overturned a 14-month drug ban, sealed the victory when he spun and shot into the far corner.

Christian Cueva also hit a post for Peru late on as they finished third in Group C above Australia, while France qualified as group winners after their goalless draw with Denmark.

Peru had played eight World Cup finals matches without a win since they beat Iran 4-1 on 11 June, 1978, and this victory was only the fifth in their history.

Peru were playing in their first world Cup tournament since 1982, although their qualification had been fortunate as they had lost 2-0 against Bolivia in qualifying, but that result was given as a 3-0 Peru win as the Bolivians fielded Paraguay-born Nelson Cabrera as a late substitute.

Nevertheless, more than 40,000 Peruvians travelled to Russia and they have been determined to enjoy every moment.

Once again their fans made for a terrific atmosphere in Sochi, even though 1-0 defeats to both Denmark and France in their opening two games meant they had no chance of progressing.