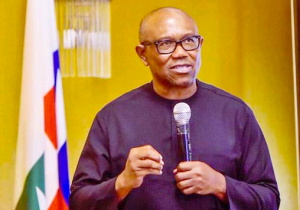 The next president of Nigeria is entering at a time of high insecurity, high unemployment rate, slow growth, rising debt cost and a number of issues. We also have a ballooning fuel subsidy figure. So, people will probably ask, why running towards what looked like a burning building rather than running away from it?

Well, for me people have to stop that fire from escalating because if you don’t stop it from a particular building, it might go on to other areas. It is difficult but it is not impossible. There are so many countries that have gone through what we are going through now, they have passed through it and they were able to come out of it through a careful, organised approach. We need to take the issues one after the other, and ask, ‘how do we deal with it?’ We have insecurity, we have a near-collapse situation in terms of the economy but it has to be handled.

What comes first, economy or insecurity and how do we handle this?

It is a combination of both. You can’t tackle one and leave the other, because in tackling both simultaneously particularly the economy, you’ve reduced criminality. Don’t forget that criminality worsened because of the collapse of the economy. We have 100 million people living in poverty. You have the highest unemployment rate in the world. It might not be the highest in percentage, but highest in number. So, the more you pull people out of poverty, the more you reduce criminality. So, as you are doing this, at the same time you are engaging, strengthening your security architecture to be able to tackle the criminal aspect of it.

Is it time we seek outside help in tackling security challenges and in doing so, what type of help should we seek?

For me, the first thing to do is to deal with it internally by reorganizing and strengthening our internal security architecture. We must also strengthen and deal with our economy in order to have a robust economy. If you have this, then you are going to seek support wherever you can get. But, it has to start with an internal position.

How will you strengthen the internal security architecture, is it by state police creation or injecting funds?

What I always tell people is that when it comes to issue of listening to politicians, it comes to issue of trust. All these people contesting, whom among them do we trust? On what I am going to do with the issue of insecurity, it will be decisive and immediate. If you are talking about state policing, for me, there is no reason why we shouldn’t even have local government police. There is nothing wrong in state police because for me, every state should be able to protect itself. It will not stop us from setting up the national police. Whatever we can do to secure the country, I will do it. It is non-negotiable. It is imperative in your clime to attract investment, there is an intangible asset of growing your GDP- security, rule of law, all these have to be in place. It is not negotiable at all. Whatever it takes to ensure that these two are there, I will do it.

If you emerge the president, what will you do about states not contributing to the growth of the economy?

Let me tell you, everything in Nigeria is viable. Nigeria is not a productive country. That is why I said we are going to move them from consumption to production. That is what Nigerian states are. Take Borno State for example. Borno State is on 70.9 square kilometres of land. Fertile land that can be used for anything. Even the Sambisa forest is about 60,000 kilometres of land, and you say we are poor. We are poor because we chose to make our states unproductive. The Netherlands is 33,000 square kilometers of land minus water. Total food export last year is $120b. That is agriculture alone. So, if Borno state decides to do one percent of what the Netherlands is doing, it is $1.2 billion. At 600, it is N700 billion, which is five times the budget of Borno State.

We chose to make our states unproductive. If we are productive, Borno State is three times the size of Israel. Israel is 22,000 kilometres of land while Borno state is 70.9 land kilometres and I can go state after state like that. We have been unproductive and living on handouts. The greatest assets of a country is one, human beings. Human infrastructure delivers four times what physical infrastructure can contribute. Nigeria is a huge country of 200 million people that are not productive. That is why we have unemployment and that is what we are going to turn around.

You will be working with the1999 Constitution; how will you carry out governance with people that are not pulling their weight?

The Constitution might have its own problem but our constitution is not what is keeping us where we are today, it is bad leadership. Notwithstanding the constitution, you can drive everybody along and still make the country productive. Why do we have an Economic Council? The Economic Council in the Constitution says the states and the federal government will meet once a month to decide the economic future of the place. The biggest asset of the country is the vast uncultivated lands we have in the North with the human beings that are there. We are just sharing the little money that is coming from a diminishing asset called oil. Oil is a diminishing asset.

If you become president, how will you deal with the fuel subsidy issue?

First and foremost, subsidy for me is a scam. It is one of the things that happens in Nigeria when people talk about stealing oil. It is organised criminality that people are participating in. Do you know how much fuel we are paying subsidy on? Nobody knows! Who is importing the fuel? Whom are we dealing with? These things have to be in the open. People ask me, will you remove it? My answer is that first, you need to show why you need to remove it and what are we replacing with the removal. The problem we are having is that the government has been operating in a situation where nobody can trust them. There is no trust between the Nigerian populace and the government. If you build trust and people can see that the things you are doing are transparent, you can be able to negotiate whether we can pay this level of subsidy and be able to use the excess, which we are not going to pay to invest in other things. But, we cannot have a situation where in a year, subsidy takes more than what we put in the most critical areas of developments. If you talk about development today, we talk about the Human Development Index. These three are life expectancy, which is Health, Education and per capita, which is pulling people out of poverty. If you put the Nigerian budget for these three items, fuel subsidy is more. So, what are you doing? How can you be throwing your people into poverty and be paying subsidies? It is unacceptable.