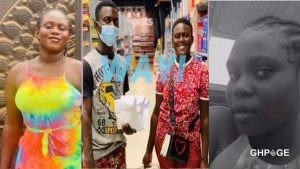 A popular Ghanaian Tiktoker, Nana Yaa has been killed by her lover.

The sad story was shared by a website in the country, GHPage.

It was gathered that Nana Yaa, (a mother of one) was shot dead when she entered one of the rooms of her baby daddy in his absence.

It also further states that Yaa, prior to this incident has been having relationship issues with her boyfriend.

In an attempt to settle their differences, the boyfriend called Nana Yaa over to his house to talk through their issues.

Sources say upon Yaa’s arrival at the house, she, unfortunately, didn’t meet her lover and therefore, had to wait for him.

After waiting for some time and feeling bored, Nana Yaa decided to take a stroll around the house.

She entered one of the rooms in the house only to find out money ritual stuff in the room.

Startled by what she saw, She took out her phone to video (only God knows what came over her. Maybe she wanted to satisfy her TikTok fans by sharing it or probably wanted to keep it as evidence).

While videoing, the boyfriend who was originally not around, came to meet her and asked why she decided to video. This resulted in an argument.

In the course of the misunderstanding, the guy pulled out a gun and shot Nana Yaa dead.

The boyfriend realizing what he had done, taped the dead body and forwarded the video to the lady’s family to report the incident and killed himself afterwards.