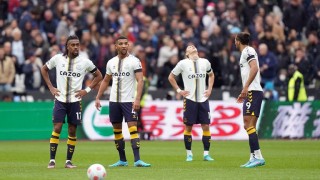 Alex Iwobi was in action for 90 minutes as 10-man Everton fell to a 2-1 defeat against West Ham United at the London Stadium on Sunday.

It was Iwobi’s 18th league appearance for the Toffees this season, and he has scored two goals.

Aaron Cresswell gave the home team the lead with a brilliant free-kick on 32nd minute.

Mason Holgate equalised for Everton eight minutes after half time.

The home team took the lead again in the 58th minute through Jarrod Bowen.

Everton were reduced to 10 when Michael Keane was sent off for a second bookable offence 25 minutes from time.